The Rocket Launcher is a firearm that launches an unguided, rocket-propelled projectile, although the term is often used in reference to mechanisms that are portable and capable of being operated by an individual.

a sci-fi stylized rocket launcher is one of the weapons Jax can use in Mortal Kombat: Special Forces. Enemies in the game belonging to the Black Dragon clan also make use of rocket launchers.

In Mortal Kombat (2011), during a cutscene in Chapter 7, Kano and Shang Tsung can be seen loading up and then firing RPG-7s in the Living Forest.

In Mortal Kombat X, Jax utilizes a rocket launcher in his Heavy Weapons Variation, replacing his Energy Wave for that variation. Jax can also dash-cancel the attack, allowing him to open to opponent up or continue combos. It is also an obtainable item in the Krypt.

In Mortal Kombat 11, guest character RoboCop utilizes a wrist-mounted rocket launcher called Arm Crowd Control Cannon, an Equip Ability that has him fire a rocket straight at his opponent. He can also delay the rocket after firing it, where it hovers in front of RoboCop for a moment before flying at the opponent. He also fires it during his Throw (Backward), regardless if the ability is equipped or not. 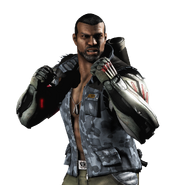 Jax Briggs - Heavy Weapons Render (Mobile) with a Rocket Launcher on his back.

A texture-less render of a Rocket Launcher and Walkie Talkie