Syzoth was sent by Shang Tsung to eliminate Cole Young and Sonya Blade. He tracked them to Sonya's home, where Kano, captured earlier by Sonya, was also held. Reptile attacked Cole and Sonya, commonly utilizing his invisibility during the battle. However, Kano, who joined the fight later, found a way to see Syzoth whilst he was invisible by stabbing a flare into his back. Syzoth was ultimately killed by Kano, who ripped his heart out.

In the aftermath of the battle, Kano drew a picture of himself killing the assassin in his notebook. 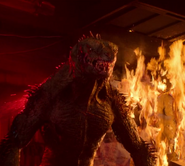