In MK4, Reptile's Lair is a room decorated by scaly reptilian designs. On the center of the back wall is a large reptilian eye with a black vertical slit. There are spherical containers surrounded by snake-like designs at the sides. At the far corners are large stone skulls with wide-open jaws that reveal silhouettes of captive humans chained to the sides of the interiors. This lair belongs to the ninja Raptor Reptile.

Reptile's Lair made its own reappearance as a walkthrough area as well as a fighting arena in Mortal Kombat: Shaolin Monks. It's located in a cave within the eerie Living Forest of Outworld. The player must first feed the enemies to the living hungry trees in order to pass through the thorny veins blocked the entrance to the lair. At the heart of this cavernous lair lies a huge chamber where the two Shaolin warriors Liu Kang and Kung Lao, while on a mission to save Earth, battle against Reptile in a dank, watery room beneath the broken floor after defeating his weapon, the Giant Serpent using the stone pillars that holds up the chamber.

It later reappeared again in Mortal Kombat: Armageddon along with the Giant Serpent, but the beast is only featured as a statue seen in the background of Reptile's Lair. According to unlockable concept art available in the game's Krypt, the Giant Serpent was once intended to be alive in the arena featured as a death trap that would eat any players who were knocked into its mouth. However, the artwork's description states, "the great serpent died before the game was finished and a statue was built in it's (sic) honor." The many giant eggs surrounding the arena are described as being Giant Serpent eggs. Beneath the in-door balcony is the Gem of Tetsurri wrapped in an aura of green energy on a claw-like pedestal. A vibration sound can be heard while near it.

Reptile's Lair in MK4 and MKG.

Concept art of Reptile's Lair inside a cave.

Tanya battling Hotaru on the lower region of the arena near the Giant Serpent in MK:A. 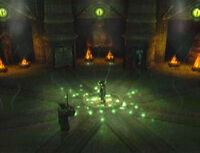 From the Living Forest into Reptile's Lair.

Add a photo to this gallery
Retrieved from "https://mortalkombat.fandom.com/wiki/Reptile%27s_Lair?oldid=282628"
Community content is available under CC-BY-SA unless otherwise noted.