Reiko's Chest Armor is a chest piece with a skull emblem worn by General Reiko, leader of the Kahn Guards and second in power only to Shao Kahn the Konqueror. It first appeared as part of Reiko's alternate costume in Mortal Kombat: Armageddon, and also appeared as a collectible Relic named "Reiko's Chest Plate" or "Reiko's Chest Piece" within the game's Konquest mode as well.

General Reiko secretly created his own chest armor long after his master Shinnok's failed conquest of the realms back when Reiko was still a high-ranking member of the diabolical ancient cult known as the Brotherhood of Shadows whose loyalty is only to the fallen Elder God himself.

Now General Reiko always wears his armor and continues to lead Shao Kahn's militia into battle. But one day, in all his desire, Reiko will soon become the new Emperor of Outworld and he will stop at nothing to make it happen.

General Reiko with his chest armor in Mortal Kombat: Armageddon. 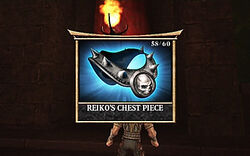