The Red Dragon are a crime syndicate present within Earthrealm in the Mortal Kombat series. Caro, guardian of clan founder Daegon, is a red dragon, which is where the name originated from.

The Red Dragon clan had existed in secret for centuries and was first created by the half god Daegon after his early awakening by his Dragon guardian Caro. Quickly forming a group of Human followers led by the warrior Mavado, the clan became a highly skilled and disciplined group of warriors. However, many of the more reckless members became dissatisfied with the restraints they were forced to suffer as well as the code of the Red Dragon placed on them. Thus, this group broke away to form their own clan known as the Black Dragon. The parent clan's number one priority since that day, outside of Daegon's objectives, was to eradicate the infidel group.

The Grandmaster of the Red Dragons, Daegon, was responsible for sending out his agents to find and kill his brother Taven. Furthermore, they were responsible for genetic experiments merging the DNA of Daegon's captive guardian Caro with that of Red Dragon Human test subjects using the Saurian Reptile's genetic material to aid in the merging process creating a race of Hybrid Dragons.

Taven eventually located the clan's stronghold in the Charred Mountains where he decimated the Red Dragon's ranks with the freed Caro. All the remaining Red Dragon Members perished in the Battle of Armageddon.

In the current timeline, the Red Dragon once more play a prominent role. The crime syndicate has hands in both the affairs of Earthrealm and Outworld, aiding the deposed Mileena in her attempts to reclaim her throne from Kotal Kahn. Blind ronin Kenshi was assigned by Special Forces Colonel Sonya Blade in infiltrating the organization and learning of its leader Daegon and his whereabouts.

His cover was blown and he was pursued by Red Dragon commander Hsu Hao under Daegon's orders. When Kenshi learned that the Red Dragon has discovered he had a son and threatened the boy and his mother to lure him out, their ploy succeeded, though Suchin was killed, the Red Dragon soldiers were then sent to find her son Takeda. Kenshi saved his son and fled to Shirai Ryu territory, where the clanmaster Scorpion killed Hsu Hao, saving Kenshi and Takeda's lives and forcing the remaining Red Dragon to flee.

Around the same time, a Red Dragon temple was attacked by Sub-Zero, who sought the Kamidogu dagger the group had acquired. He fought Kano for it before fleeing.

When Kenshi attempted to call Special Forces for extraction, the Red Dragon attacked him again, joined by several local terrorist cells they paid for help. Kenshi would survive this attack with Colonel Sonya Blade's help and the two would escape.

Years later, the Red Dragon would help Mileena assassinate Kotal Kahn's father, Kotal K'etz, with Mavado leading the forces that ambush K'etz soldiers. Though a large majority of the Red Dragon forces in Outworld were killed by Kotal Kahn in retaliation, Mavado would learn of Sonya and Johnny Cage's daughter and friend having been kidnapped by the Black Dragon and changed their mission to get the girls, confronting Kano and Erron Black for them. The Red Dragon would fight the Black Dragon for both girls, and managed to kill all the Black Dragon soldiers thanks to their superior numbers, forcing Kano to flee. While Mavado succeeded in badly wounding Erron Black, he was ultimately killed with his own hook sword by Cassie Cage.

The Red Dragon still captured Cassie Cage and Jacqui Briggs despite their commander's death and the girls were brought back to Earthrealm on Shang Tsung's Island where Havik and Reiko awaited them.

When Kotal Kahn arrived on Shang Tsung's Island alongside his trusted advisor D'Vorah and Cassie's parents, Johnny Cage and Sonya Blade, several groups of Red Dragon soldiers accompanied Reiko, Skarlet, and the Blood Code corrupted Cassie and Jacqui to meet them and Kotal's forces. While some Red Dragon soldiers would fight Kotal's men, Kotal and D'Vorah slaughtered several to get to Reiko and Skarlet.

The Red Dragon soldiers were spared from the wrath of a Blood code possessed Raiden controlled by Havik, with the chaos cleric ordering them to collect the unconscious "champions" and bring them to Shang Tsung's Palace for the coming ritual. The Red Dragon troops were also ordered to take Reiko's remains to the Flesh Pits to revive the general.

The Red Dragon were present at Reiko's ascension and on Havik's orders, brought in the Tarkata and Outworld prisoners for Reiko to feed upon. Later, a group of Red Dragons attempted to burn D'Vorah's remains, only to wind up devoured by her insects instead.

After Reiko's death and Havik's defeat, the few surviving Red Dragon soldiers returned to their base in the Krimson Forest. When Goro arrived, demanding to speak with Daegon, Red Dragon troops mocked the crippled Shokan Prince, who easily and quickly subdued them with stomps alone. Daegon greeted Goro, who expressed interest in the Dragon King Onaga's ability to regenerate limbs, which he learned from the Red Dragon's lore on Onaga. While Daegon was initially uninterested in helping Goro, he changed his mind once he saw Goro had brought with him an unconscious and beaten Kenshi.

Members of the Red Dragon clan, excluding the more prominent named members, are divided into:

Daegon the founder of the Red Dragon clan. 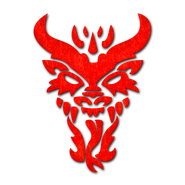 This modern mercenary with electric batons is part of the Red Dragon Clan.

Kenshi with his cover blown after going undercover as a Red Dragon member. 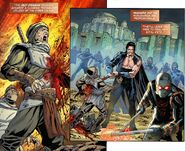 The Red Dragon battling their rivals, the Black Dragon. 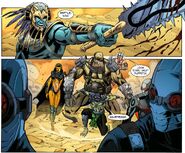 Kombat Kard Background, showing off Red Dragon members. With the Red Dragon Soldier on the right, Hsu Hao in the middle, and Mavado on the left