In Mortal Kombat (2011), the official reboot of the series, which covers, and alters, the past events of Mortal Kombat 1-3, Rain was introduced as DLC. His original backstory as an Edenian orphan is retained, although in a modified form.

He bore witness to the invasion of his home world at the hands of Shao Kahn. During the chaos that ensued, Rain was smuggled away while his father stayed behind to perform his duties as a general in the Edenian army. Edenia's armies were crushed in the Outworld invasion, and Rain's father was subsequently killed by Kahn himself.

After that, he was rescued and raised by the Edenian Resistance following his adoptive father's death. He trained hard under their tutelage and turned into an elite, but arrogant fighter. He served the Resistance well for many years and he was denied his own command. Infuriated, he betrayed his own brethren and joined his mortal enemy, Shao Kahn, who promised Rain leadership of his own army. 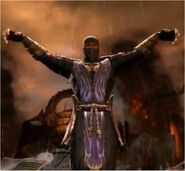 Rain's Does it Sting Fatality 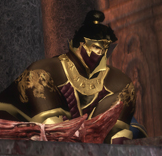 UMK3 Rain
Add a photo to this gallery

Retrieved from "https://mortalkombat.fandom.com/wiki/Rain/Current_Timeline?oldid=230545"
Community content is available under CC-BY-SA unless otherwise noted.