Rain's Mask is a regal-looking ninja face mask worn by the treacherous Edenian warrior Rain. It also appeared as another collectible Relic within the Konquest Mode of Mortal Kombat: Armageddon. The Edenian traitor Rain uses this face mask as a means to conceal his true identity as a traitor of the Edenian Resistance.

Played by Tyrone Wiggins, a masked Rain made a brief appearance in Mortal Kombat: Annihilation as a servant of Shao Kahn. He was killed by Shao Kahn at a relatively early stage in the film, for allowing Kabal and Stryker to live, when Shao Kahn knocks him into a fire pit using his Wrath Hammer.

Rain made an appearance with his different mask during one episode of Mortal Kombat: Conquest where he was played by Percy Brown.

Rain with his ninja mask in MK Trilogy. 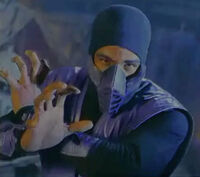 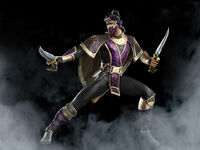 "Prince" Rain who was a former native of Edenia, always wears his mask. 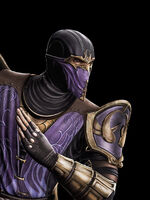 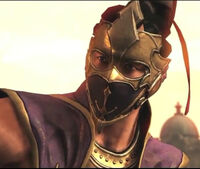 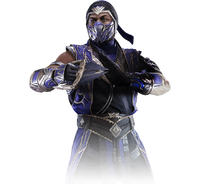 Rain's mask in MK11
Add a photo to this gallery

Retrieved from "https://mortalkombat.fandom.com/wiki/Rain%27s_Mask?oldid=364724"
Community content is available under CC-BY-SA unless otherwise noted.