< Raiden
View source
watch 02:46
The Quarry - The Loop
Do you like this video?
Play Sound

Lord Raiden is a character in the 2021 Mortal Kombat film. He is portrayed by Tadanobu Asano.

An Elder God and the champion of Earthrealm, Lord Raiden grants sanctuary in his temple to those who bear the dragon mark that serves as an invitation to Mortal Kombat. He has assembled a team of champions to battle against the forces of Outworld, but has begun to lose faith in the world because people have forgotten its mythology. Having lost in the previous nine tournaments, he does not have much hope for his latest group, and is beginning to think that perhaps he should give up. He has the power to send anyone within Earthrealm to somewhere else within Earthrealm with a single flash of lightning.

When Liu Kang arrives at Lord Raiden's temple with the champions of Earthrealm that he has gathered, Raiden is seemingly unimpressed. He dismisses Cole Young as being in no shape to fight, criticizes Sonya Blade for not having the dragon marking signifying she can unlock her arcana, and tells Kano that he is powerless and arrogant. Cole pleads with him to help them, that they tried to kill his family. Raiden replies that there's nothing for him the except death and he replies that he's willing to die with his family. "Let's see if you have what it takes," replies Raiden.

Just then, Shang Tsung appears in the temple with several of his warriors, declaring that Raiden is too late and he's come to claim Earthrealm. Raiden, finally showing some fire, tells him that it his forbidden to claim victory before the tournament begins. Shang replies that conflict outside of Mortal Kombat is not forbidden and that the other Elder Gods are too lazy to stop him. He orders his warriors to attack, but Raiden enacts an energy barrier to keep him out. Shang warns him that his "tricks" will not work forever.

After Cole Young fails to find his arcana during his training, Raiden declares him a liability. Cole asks him where his dragon marking came from, if he's the only champion that had it since birth. He replies that Cole's marking came from his lineage, that he's a descendant of one of the greatest ninjas ever, Hanzo Hasashi. He explains that Sub-Zero murders him, but he rescued his child, so his bloodline lives on. He orders Cole to go be with his family, saying that he had hoped the power of the Hasashi marking was still in it, but it isn't the case.

Following this, Shang launches his invasion of Raiden's temple with the help of Kano, who betrays Earthrelam's champions by breaking the energy barrier. He sends Goro to attack Cole Young at his home, but Cole emerges victorious by finally unlocking his arcana. Afterwards, Raiden sends Cole back to Raiden's temple. There, he mocks Shang Tsung by thanking him for helping his fighter to discover his arcana, saying that "after 4000 years, the Hasashi bloodline still lives on." In retaliation, Shang sucks out the soul of Kung Lao. Raiden then transports the remaining fighters of Earthrealm to the Void, a safe area that Shang and his forces cannot reach. He apologizes to Liu Kang for Kung Lao's loss and Jax Briggs asks why he cannot stop it. He explains that the Elder Gods are forbidden from engaging one realm's war against another and that it is his job to protect Earthrealm, but he can't save every soul within it. Cole Young then declares that they still need to fight and concocts a plan by with they will split up Outworld's fighters by taking advantage of Raiden's power to send anyone to anywhere within Earthrealm.

Following the battle, Shang Tsung appears once more. Raiden tells him that the prophecy has been fulfilled, asking if the blood on his hands has taught him nothing. Shang replies that death is only another portal and that next time, he will return with armies. Raiden demands that he return to Outworld at once and when the tries to keep talking, he transports him away then declares to the others "He talks so much." He tells them that while they are victorious today, there are more battles to fight. He says that he will assemble a new list of champions. "Who's first?" asks Cole.

In preparing for the film, Lord Raiden actor Tadanobu Asano felt it was important to not just read his own lines, but also dialogue of others speaking about Raiden in order to truly understand the character. Lord Raiden's hat was designed to look like a metal hat, but made with fiberglass materials with metallic elements so as not to be too heavy.[1] 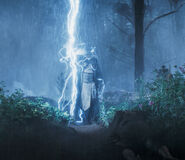