Created by the Edenian god, Argus, as the final battleground and the Elder Gods' safe guard should Armageddon occur, this pyramid rises forth when one of Argus' sons falls in battle. The triumphant son of Argus then steps through a nearby portal, instantly teleporting them to the top of the pyramid to confront the fire elemental Blaze.

Downstairs, all Kombatants (possibly fifty to sixty) wage war against one another in an epic conflict of good versus evil and eventually race to the top to gain the power promised should anyone defeat Blaze. Once Blaze is defeated, the vanquisher gains the immense power contained within Blaze, essentially gaining god-like power.

Though anyone can obtain this power, Argus meant for only the stronger of his two sons (Taven and Daegon) to gain this power and stop Armageddon. 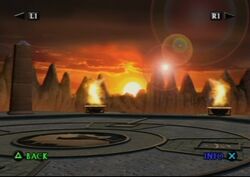 Atop the Pyramid of Argus. 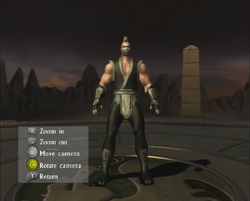 A kreated kombatant stands atop the pyramid in MK: Armageddon. 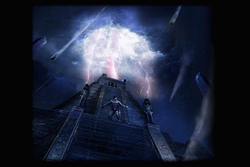 The Pyramid as shown in Green Lantern's ending in MK vs DC Universe.

The Krypt art used to show off unlocked alternate outfits for the characters was actually made in game in an arena that players can't access. 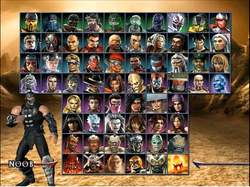 Cameo in MK11
Add a photo to this gallery
Retrieved from "https://mortalkombat.fandom.com/wiki/Pyramid_of_Argus?oldid=332710"
Community content is available under CC-BY-SA unless otherwise noted.