Portal Spheres are the physical manifestations of the magic that merges one realm to another. These mystical orbs are hidden throughout Outworld, courtesy of Shao Kahn himself. In order to separate two realms, the orb associated with the merger must be destroyed.

The Vampiress Nitara who has long waited to separate and liberate her homeworld from Outworld, succeeded in finding and retrieving a Portal Sphere from the molten depths of the Lava Shrine with the help of the cyborg ninja Cyrax. Fulfilling her end of the bargain, she then took her magic crystal necklace in hand and uttered a mystical incantation. A swirling portal opened around Cyrax and he only had time for a solemn bow to his new friend and ally before he was swept into the gateway and back home in Earthrealm.

Nitara herself was finally ready to achieve her dream of freeing her people from their wrongful imprisonment and Shao Kahn's savage grip. Nitara stared into the Portal Sphere. It seethed with the power trapped within. She raised it above her head and then smashed it to the floor. It shattered with an inhuman soul-rending howl. Its horrible energy exploded away and tore her consciousness from her. Nitara's life long dream had at last came true when she awoke later, for the first time, on her native soil.

One of these Portal Spheres is also found and located at the Celestial Portal. 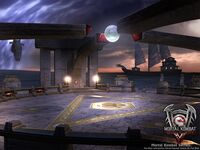 A Portal Sphere found at the Celestial Portal.