Peron (played by Josie Davis) is Scorpion's sidekick, introduced in and appears solely in the 15th episode of Mortal Kombat: Conquest.

It is also seen that she is very skilled in the art of Kombat and assassination. Actually, she is the one who killed Lisa, Sub-Zero's younger sister, impaling her through the back with a knife. Sub-Zero, after seeing this, grabs Peron by her neck and freezes her to death; he then drops her, causing her to break.

It was mentioned twice that Takeda, the man Scorpion uses as a host body, was involved with Peron, and she had disappeared from her home the day that Scorpion had taken over Takeda. It is never mentioned whether Peron cares or really knows about Takeda's true fate, but she was quick to defend him even against Shao Kahn. Siro also mentioned, while searching for her, that "she wasn't a popular lady in her neighborhood" and that no one really cared when she left with Scorpion. Considering Siro's words, she probably was a possible criminal or murderer as shown when she killed Sub-Zero's sister without hesitation. Since Scorpion was very protective of Peron and vowed to kill Sub-Zero when she died, fans speculate that Takeda may still be alive or have some influence over Scorpion (albeit Scorpion has more control). 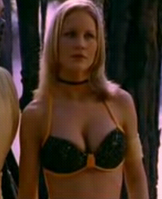 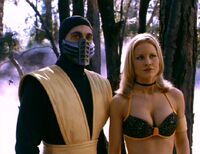 Scorpion with Peron, his companion and second-in-command 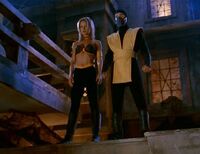 Peron as she is seen with Scorpion 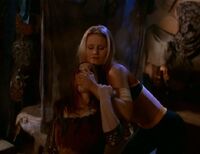 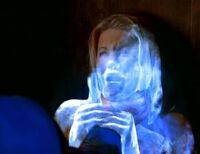