Outworld made its appearance in the Mortal Kombat and its sequel, Mortal Kombat: Annihilation, as a vast mystical realm with a dark, yet clear purple sky, crumbled cities with heads of huge broken statues, demonic torch-holding statues on Outworld's broken streets and roads, and even frightened human-like Outworlders living in fear under the reign of Shao Kahn.

In the first film, Liu Kang and Johnny Cage travel there by portal to rescue Sonya Blade after she was captured by the sorcerer Shang Tsung while Johnny battled the Shokan prince Goro. After Liu Kang defeats the Zaterran Reptile who was secretly following him and Johnny, Kitana joins forces with them and guides them safely through Outworld's landscape. She explains the realm's origins as a once beautiful, majestic world before the Emperor (Shao Kahn) took it over after defeating her father's best warriors in ten consecutive Mortal Kombat Tournaments. After they rescue Sonya and defeat Shang Tsung, all four of them returned to Raiden in Earthrealm, seeking to enjoy relative peace for the next generation. This hope quickly vanishes when Shao Kahn launches a direct invasion, and they are forced to defend Earthrealm from the invading Outworld army.

Outworld appears in the 2021 film Mortal Kombat as the home world of Shang Tsung and his forces and the antithesis of Earthrealm. In the film, Shang and the forces of Outworld are just one Mortal Kombat victory away from being able to invade and subsume Earthrealm. This is greatly desired by Shang Tsung, as Outworld has decayed into a dying wasteland, making Shang even more desperate. 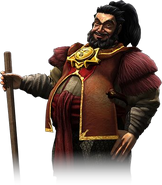