Not to be confused with Lin Kuei Grandmaster.

Evil
Oniro was a character from Mortal Kombat: Defenders of the Realm, and was the former Grandmaster of the Lin Kuei before its reformation.

It's not known how long Oniro held the title of Grandmaster except that he was present before the order was given to automate their ninja assassins. He was present when both Cyrax and Sektor went through the cybernetic process at which point both Sub-Zero and Smoke refused to take part in. The two friends attempted to escape the Lin Kuei but only Sub-Zero managed to escape while Oniro captured Smoke and forced him to undergo the cybernetic process.

Despite forcing many of his former students into becoming cyber ninjas, Oniro himself remained human. He would later attempt to hunt down Sub-Zero with the automated Smoke, but this failed when Smoke regained his memory and went against his programming. The Grandmaster would fall into a chasm, but managed to transform into a large bird to escape his death.

Oniro was a master ninja who possessed the ability to change his form into that of any animal, which provided him a great level of skill in combat. He was even capable of changing parts of his body rather then transform entirely into an animal as evident by his capacity to transform his arms into sharp cat-like claws to help enhance his fighting style. One of his forms was that of a dragon, which was capable of spitting out fire at his enemies.

He was trained well enough to outfight Smoke easily and possessed enough power to break large rocks with a simple strike from his hand. He wore a version of the ninja uniform used by the Lin Kuei which was white in color.

Oniro is very clearly influenced by the character Shang Tsung. He possesses similar morphing ability and has lines such as "Your soul will belong to me!" and "Finish him!". Shang Tsung himself would appear later on, however.

Oniro and the Lin Kuei masters sit as they witness the results of the automation of Sektor and Cyrax. 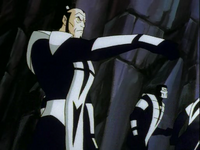 Oniro orders the Lin Kuei ninjas to capture the runaways Sub-Zero and Smoke. 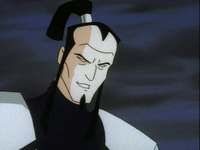 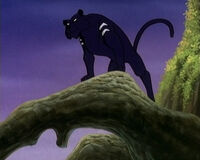 Oniro transformed into a panther via his shapeshifting ability.

Oniro looks upon the trapped Sub-Zero.

Oniro dangling over a cliff.

Oniro with Sektor
Community content is available under CC-BY-SA unless otherwise noted.
Advertisement