The Oni are demonic creatures that reside in the Netherrealm that have appeared throughout the series.

The Oni makes its playable debut in Mortal Kombat Mobile.

The Oni are the denizens of the Netherealm, however they appear to be completely savage in nature. They do not seem to speak and only roar or growl but seem to be obedient to leaders of the Netherrealm, such as Shinnok, Quan Chi, and the Revenant versions of Liu Kang and Kitana.

The Oni's overall appearance changes with every appearance in the games they are depicted in.

In Mortal Kombat X's Story Mode, they appear as large hunched-over creatures with grey skin with glowing orange eyes and glowing orange streaks throughout their body with spikes that protrude from various parts of their body. Additionally, two types of Oni are present, ones with streaks that only appear on their upper body and arms and ones that possess wings with larger streaks throughout their entire body.

In Mortal Kombat Mobile and Mortal Kombat 11's Story Mode, the Oni have natural armor plating on their bodies, however their appearances are different. In MK Mobile, the Oni has gold armor with brown skin while in MK11, they have a pale skin color and the color of their armor is roughly the same as their skin. Additionally in MK11, the have the same glowing orange streaks on their bodies like in MKX, however these are drastically reduced. Another noticeable difference is that the Oni in MK11 appear to wear some sort of combat pants and boots, wield swords and have large horns that vary in size and shape between each Oni. 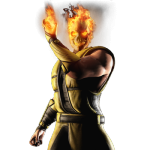 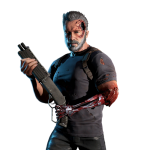 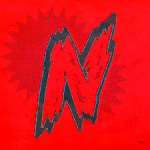