Ninjas are a common character type featured in the Mortal Kombat series.

Ninja is a loosely used term in the actual sense of ninjas regarding the Mortal Kombat franchise, thus they are a very prominent group of characters. The criteria for a character to classify as a ninja by design (at least back in the earlier games) is often seen wearing a mask, a combo of a hood/cowl and a tabard for male or a leotard for female. It is not uncommon for a ninja to possess supernatural powers that gives them the edge over their opponents. From Mortal Kombat to Mortal Kombat Trilogy, ninjas were virtually identical to one another in terms of appearance, save for their color choices, poses and powers. From Mortal Kombat 4 onwards, ninjas were given a better sense of diversity with their designs.

In reality, all of the ninja characters in the first three Mortal Kombat games were all represented by a single actor. The original base costume for the male ninja in Mortal Kombat (1992) and Mortal Kombat II was of a yellow color, worn by Daniel Pesina, while the base costume for the female ninja was blue in MKII, worn by Katalin Zamiar. In Mortal Kombat 3 and Ultimate Mortal Kombat 3, the base costumes were red for all MK3 unmasked Sub-Zero, female, & cyborgs, worn by John Turk, Becky Gable, and Sal Divita respectively, in order to avoid blending in with the blue background used when filming the characters for the sprites. However, the UMK3 male ninja was of a yellow color, worn by John Turk. This method was used because of memory limitations and an attempt to get more playable characters for the roster. The ninja actors had to perform a wider array of moves and multiple fighting stances than the others as they would be "portraying" multiple characters at once. Once the sprites were captured, they were digitally recolored, creating color values to be applied to the numerous characters. These values were programmed and coded to be treated as separate character values, having access to certain sprites and individual special moves to create their identities.

Because of this, there is a possibility to 'unlock' access to all of these sprites to any ninja, granting them different abilities by swapping movesets or give them every single special move. This would eventually be explored by the Mortal Kombat Trilogy hidden characters Chameleon and Khameleon, as well as Mortal Kombat X's DLC character Triborg, several years later.

Reiko, who was introduced in Mortal Kombat 4, was created by modifying Noob Saibot's then-unused model into a new character, creating an unmasked magenta-colored ninja. Reiko has long since abandoned this design for a look modelled after Shao Kahn, and is generally not grouped with the ninja archetype.

Unlike most other characters grouped with this archetype, Tanya, Frost, and Takeda Takahashi did not necessarily originate from a palette swap.

With each DLC character released, two classic outfits would be released with the compatibility packs.

With Skarlet's release, her compatibility pack provided a classic outfits for Cyrax and Sektor, based on their Mortal Kombat 3 outfits.

With Kenshi's release, his compatibility pack provided a classic outfit for Smoke and Noob Saibot, based on their Mortal Kombat II outfits.

With Rain's release, his compatibility pack provided a classic outfit for Kitana and Jade, based on their Mortal Kombat II outfits.

With Freddy Krueger's release, his compatibility pack provided a classic outfit for Sub-Zero, based on his Mortal Kombat 3 appearance as well as an outfit based on the classic cyber ninja outfits for Cyber Sub-Zero.

In the Playstation Vita port of the game, the MK and MKII outfits were available from the outset. All of the ninjas, including Rain and Skarlet, were given UMK3 outfits, with Sub-Zero receiving a proper masked outfit to go with his maskless appearance (which is labeled as "UMK3" whereas the others are simply labeled "MK3"). Skarlet also received an MKII outfit based on her rumored appearance, though retaining her hair color. Rain's UMK3 outfit in particular is unlockable by completing the final mission in the Bonus Challenge Tower.

Mortal Kombat X continued the tradition by giving Scorpion, Sub-Zero, Ermac, and Reptile their UMK3 outfits (with Reptile being given an altered version of his mask) as free costumes with each successive update, while Kitana and Mileena's MKII costumes were available as unlocks through the mobile game. In addition, Scorpion, Ermac and Sub-Zero were given a stylized, metallic version of Scorpion's MKX appearance, with Scorpion's being exclusive as a Kollector's Edition bonus while Ermac's and Sub-Zero's can be purchased normally.

Mortal Kombat 11 gives all of the ninja characters save Frost outfits based on their MK2 appearances. For Scorpion, Sub-Zero and Noob Saibot, theirs were made available alongside Shang Tsung as part of the Kombat Pass while Kitana, Jade and Skarlet's were added later as Premium Shop items. These outfits also provided alternate color palettes, some based on their default MK11 appearance. Following the 1.0.15 Version update, Jade's MK2 costumes were updated so her staves would be purple, mirroring her classic look. In the Aftermath expansion, Robocop is given an additional costume based off of the MK3 cyber ninja outfit despite not being one by default.

Due to the increased customization options, characters can wear palette swap outfits outside of their usual color schemes. This is put into effect with the Gauntlet Towers which often pits the player against opponents wearing certain costumes reflective of ninja characters not featured in the game along with appropriate modifiers based on them 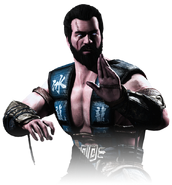 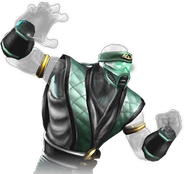 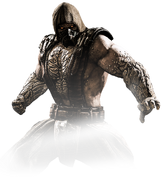