The Naknada are a race of six-armed goblin-like creatures that were conquered and enslaved by Shao Kahn. They serve the emperor, and built the Koliseum and the Kahn's Palace among other things. They were often infamous for their insatiable greed and amoral perception of wealth, causing many Outworlders to despise them and justify their status as slaves. A good number of them, however, were later granted status during the reign of Shao Kahn as tribute collectors and slavers with his blessing.

The Naknada do not have names in the traditional sense, instead taking the names of their jobs. 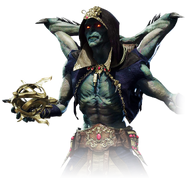