The Mystical Orb (originally called the Giant Ball of Death) is a weapon used by Moloch the Oni Destroyer, which resembles a stone sphere with chains wrapped around Moloch's arm and also has strange line markings on it. It first appeared, along with him, in Mortal Kombat: Deadly Alliance and again in Mortal Kombat: Armageddon.

This cursed "treasure" can be seen in a concept art sketch when it was carried off by an owl named Herald before being returned to the hands of the Oni Moloch.

In Mortal Kombat: Armageddon, it doesn't seem that Moloch possesses it, but it appears during his Versus Render, and during some of his special moves. It was featured as one of the collectible Relics under the name Moloch's Ball found within the game's Konquest mode as well.

In Mortal Kombat 11, Kollector uses this weapon specifically in his Head Lantern Fatality.

Moloch with his chained Giant Ball of Death. 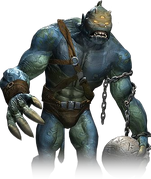 Moloch as he is seen with his Orb.

The Giant Ball of Death, also known as the Mystical Orb.

Moloch's Ball and Chain in MK Mobile as an Equipment Card