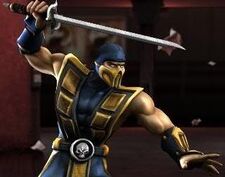 Mugai Ryu is the art of Kenjutsu and Iaijutsu of Japanese swordsmanship founded in 1695 by Tsuji Gettan Sukemochi. The primary facet of this art lies in attacking with the sword already out of the saya, or scabbard. Mugai Ryu follows the Katsujinken philosophy, the philosophy that the sword is not used to kill, but to give life. Often offering opponents the chance to surrender before killing them. Historically, Tsuji Gettan's style was based on battlefield principles and techniques honed from the Tokugawa period of Japan, tempered with the teachings and enlightenment of the Zen Priest Sekitan, under whom Tsuji Gettan learned the ways of Zen.

Scorpion is a known practitioner of Mugai Ryu, although the philosophical doctrines are opposite of most of Scorpion's mannerisms. Scorpion wields a custom katana (or rather a kodachi, but it had a straight blade in Deception, making it similar to a ninja sword) designed for maximum carnage and blood spilling with a razor-blade tsuba, or hand guard, and a serrated blade. Scorpion's katana is also noted for having "Made in Hell" stamped onto the blade.

Mugai Ryu in MK 2011 after Scorpion is finished doing his Fatality.

Scorpion's Mugai Ryu swords on his back in MK 2011.

Takeda uses his master's Mugai Ryu against him in MKX.