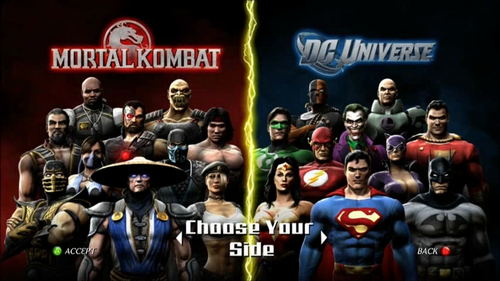 The Story Mode of Mortal Kombat vs. DC Universe is told over 15 chapters (7 for Mortal Kombat characters and 8 for DC characters), with a single character being playable for each chapter. The order of the chapters is listed below. The only characters without chapters dedicated to them are Kitana, Baraka, Kano, Deathstroke and Catwoman.

This non-canon story is (or would be) set after the events of the Outworld invasion. Around the same time as Shao Kahn's defeat, Superman had just defeated Darkseid; however, Darkseid and Shao Kahn's defeat somehow caused them to merge into a single being known as Dark Kahn, and cause the kombatants & DC heroes/villains to be consumed by a pure Rage that makes whoever around them morph into their worst enemy, and as a result they fight against each other. Because of this, the two universes begin to merge. Eventually, one member from each side remained: Raiden and Superman. Upon discovering that they both have a common enemy (Dark Kahn), they team up to defeat Dark Kahn, causing him to split back into Shao Kahn and Darkseid, in opposite universes. Shao Kahn would be trapped in the fragmented Phantom Zone, while Darkseid was punished by the Elder Gods and sent to the Netherrealm.

This story is told through 2 different narratives:

Shao Kahn has recently failed in his latest bid to merge Earthrealm with Outworld. As he regroups with his second-in-command, the sorcerer Quan Chi, Raiden confronts him directly. Quan Chi makes a bid to escape, only for Shao Kahn to knock him out of the way with his Wrath Hammer. Raiden attempts to use his lightning blast to knock Shao Kahn through the portal, but this instead causes it to destablize, until it eventually explodes with Shao Kahn inside it. Raiden then takes Quan Chi to the Elder Gods, so that they may pass their judgement upon him.

At the same moment, in Metropolis, Superman has finally defeated Darkseid and his army of Parademons. Darkseid attempts to escape through a dimensional Boom Tube whilst Superman argues with Lex Luthor, who had helped Darkseid invade Earth. Superman stops him with his heat-vision, which causes the Boom Tube to become disrupted and explode with Darkseid inside it. He then turns Luthor into the authorities.

Unknown to either Raiden or Superman, the explosions do not kill either Shao Kahn or Darkseid, but instead merge them into a singular monstrosity known as "Dark Kahn". As a result of Dark Kahn's existence, the two universes start merging with each other, whilst a mysterious force known simply as the "Kombat Rage" starts to spread through the various warriors.

Not long after the invasion, many of Liu Kang's fellow White Lotus and Kitana's Edenian Forces disappear, seemingly without trace. The two meet up to discuss the issue, and resolve that either the Lin Kuei or Black Dragon is behind it. However, when Liu Kang is ambushed by Sub-Zero, he discovers that the Lin Kuei have been suffering losses as well. After earning Sub-Zero's trust by saving him from Scorpion, Kang battles the spectre until, through an unusual force (the Kombat Rage) he disappears, and is replaced by The Flash. At first believing him to be an illusion by Shang Tsung, Kang soon realizes that Flash represents a different kind of warrior altogether. When he attempts to analyze Flash, he too is infected by Rage, and disappears. This prompts Sonya Blade, who he was in contact with moments before, to find him.

After defeating Baraka, Sonya begins to suspect that Earthrealm is facing another invasion and decides to inform Raiden at his Sky Temple. Here, however, she encounters Captain Marvel, who is suffering from the effects of the Kombat Rage. As he matches the description Kang had given her of Flash earlier (Something resembling a red devil with a bolt of lightning on his chest), Sonya, believing him to be the warrior Kang thought, tries to interrogate him, but is interrupted by Green Lantern. The two leave for the U.N. Orbital Space Station, where, moments later, Raiden appears, accompanied by Liu Kang. Unsure exactly who the superheroes are, Raiden begins to suspect that Earthrealm is merging with another realm, and that Shao Kahn may still be alive.

Sonya and Jax Briggs travel to the Space Station, where Jax is able to subdue not only Marvel, but also Wonder Woman, who had captured Sub-Zero. Although they do not entirely trust him, they seek his assistance, whereby Sub-Zero decides to find answers from Quan Chi, believing he would know something about the threat of invasion. He turns for Raiden for advice and manages to persuade the Thunder God to inform him that the best way to locate Quan Chi would be to find Scorpion.

Sub-Zero tracks Scorpion through Gotham City until he is transported into the Netherrealm, where Quan Chi has been chained to a set of stone pillars as punishment by the Elder Gods. By tricking Sub-Zero and Scorpion into fighting each other, Quan Chi is able to use the effects of the Rage to release himself. He then sends Sub-Zero back to Raiden, and instructs Scorpion to find Kitana. After a few false starts, Scorpion does find Kitana, overpowered by Rage and in belief that he is an assassin sent by Dark Kahn (a name Scorpion isn't familiar with). Regardless, he is able to overpower her for long enough for Quan Chi to control her with his magic.

After sending Shang Tsung, Scorpion and Baraka to kill Captain Marvel, Quan Chi takes Kitana back to Raiden's sky temple. He uses the last of his powers to cure Kitana's Rage and, in doing so, gains Raiden's reluctant trust. Here, the kombatants learn from Kitana and Quan Chi about Dark Kahn and the merging of the two realms - supposedly, the merging is fuelled by the rage, which agitates the warriors until they fight, whereby the rage is released, which only hastens the merging.

The combined forces of light and darkness realize they must work together to eliminate Dark Kahn and the beings they believe to be his forces - the DC heroes and villains. To do this, they split into teams of two bitter rivals in order to focus the rage against each other (Liu Kang, for example, is forced to work alongside Shang Tsung). However, they are only partly successful in this task. Jax later informs the kombatants that Dark Kahn's "forces" had infiltrated the Special Forces base and used the Portal Technology. Believing that they have gone to Outworld, the combined forces head there too, knowing that, if they fail, none of them will survive.

It has not been long since Darkseid's defeat against Superman, and The Flash is travelling between cities to help fight crime. Whilst trying to stop Catwoman's crime spree in Gotham City, he runs into Kano and, when a strange "Rage" overpowers him, prepares to kill the defeated Kano in cold blood. He is prevented from doing so by Batman, who incapacitates Flash and returns him to the Batcave to analyze his condition. Here, though, he is teleported to another realm (the Mortal Kombat realm, as it turns out) and is replaced with Scorpion, who attacks Batman in the belief he is Sub-Zero in disguise.

Batman is able to subdue Scorpion, and performs some more tests on him when he detects an anomaly in the heart of Gotham, similar to the one Scorpion gave off. Here, he confronts Liu Kang, who attacks him, believing he is Shang Tsung in disguise. After defeating Liu Kang in combat, Batman takes the Shaolin Monk to the U.N. Orbital Space Station with the help of Green Lantern. Moments later, however, Raiden appears and retrieves Liu Kang. From the Space Station, Batman sees that Earth is merging with another world. With Superman nowhere in sight, he asks Wonder Woman for assistance.

Wonder Woman searches Metropolis in an attempt to find Superman, but instead finds a panicked Kitana, who seems to speak of a being who she thought had been destroyed, but had returned in a much more powerful state. Wonder Woman, thinking she means Darkseid, tries to get more information from Kitana, but she becomes hostile, fights her and eventually escapes once she has been defeated. Wonder Woman decides to investigate the Fortress of Solitude, only to find that Sub-Zero has encased Superman in ice. She eventually defeats the Lin Kuei warrior and frees Superman. He explains that his powers seem to be siphoning away from him and, after Wonder Woman explains what has happened, expresses his own concern that Darkseid may be returning.

Wonder Woman then receives an SOS call from Green Lantern. An enraged Captain Marvel attacks him, and appears to kill him, but instead he is transported to Oa, where the Guardians of the Universe explain to him, Lex Luthor and Catwoman (who had teleported there) about the crisis and that they must work together to stop the threat. Later, Captain Marvel, having recovered from the rage, seeks advise from the wizard Shazam, who informs him of Dark Kahn and explains that, if he is not destroyed, then both Earth and the invading realm will be destroyed.

After a run in with Shang Tsung, who forces him to fight Scorpion, Baraka, and himself, Captain Marvel, defeating all three warriors, meets up with Superman, along with Lex Luthor, Catwoman, Deathstroke and The Joker (who had teamed up in a bid to "save the world", according to Luthor), and explains the situation. Believing that, if Dark Kahn is made of Darkseid's energy, he is most likely in Apokolips, Luthor sends Deathstroke and Joker to locate the portal he and Catwoman used earlier to transport to Oa, positive it will transport them to Apokolips as well. During their mission, Joker feels the full effect of the merger (and thus gaining strength) and abandons his mission to take on Batman.

Luckily, Luthor had merely sent Deathstroke and Joker as a diversion; he and Catwoman eventually locate the real one at the Special Forces base. Luthor is able to defeat Jax when he tries to stop him, and then a badly Rage-infected Flash, who has subdued Catwoman. Both recover when the other DC heroes and villains arrive. Although all have been infected by the rage at some point, they know they have to take the risk, and all ten head through the portal to Apokolips.

The Mortal Kombatants and the DC forces arrive to find that Outworld and Apokolips have been completely destroyed. They confront each other, and prepare for a face-off when Dark Kahn appears before them, and infects them all with Kombat Rage, before forcing them to fight. After a long, hard fought battle, only a small handful on each side remain. Raiden and Superman, fueled by the rage, take their aggression out on Shang Tsung and Lex Luthor, respectively. However, with intervention from Liu Kang/Batman, they are able to overcome the rage, and head off to Dark Kahn's throne room.

With Dark Kahn's defeat, the Mortal Kombat and DC universes are separated, as are their respective inhabitants, and the realms are restored. However, Shao Kahn and Darkseid, although separated, have switched realms and are rendered completely powerless. Shao Kahn is imprisoned in the Phantom Zone, whilst Darkseid is banished to the Netherrealm.

Retrieved from "https://mortalkombat.fandom.com/wiki/Mortal_Kombat_vs._DC_Universe%27s_Story_Mode?oldid=338324"
Community content is available under CC-BY-SA unless otherwise noted.