Any kombatant will work as long as you can avoid the computer's combos, preceded by him or her running towards you. Your offense should begin with a flip punch and any combo that starts with using high punch. Keep repeating this on your first opponent, and the battle will be pretty easy.

At the second battle and onwards, the best kombatant to choose to destroy the computer is Noob Saibot or someone with a Spear like Scorpion or both versions of Smoke.

Noob Saibot is probably the best by far due to the creativity you can add to his special moves. Noob can easily lay waste to any opponent if used properly. You can start the battle with either a Shadow Throw or Teleport Slam. If using the Shadow Throw and after its success, you can move where your opponent is about to fall and hit him or her with an uppercut. Your next move sequence should be a sweep, Disabler, a combo or two, another sweep and Disabler. If you resorted to using his Teleport Slam, you can proceed it with an uppercut or Disabler, and follow the same sequence. If you miss your slam, immediately throw a Disabler or shadow. Noob's Teleport Slam and Shadow Throw also are good ways to snag an escaping opponent, and you can always finish those two moves with an uppercut. Additionally, the Disabler can be added after a successful Teleport Slam.

If you've chosen Cyber Smoke and to catch the computer off guard, try executing a backflip and then a mid-air Smokeycut. After a successful Smokeycut, deliver a Spear and a good button-link combo. Also of note, a flip kick followed up with his Smokeycut succeeded by a Spear and a good combo is lethal. To completely thwart the computer's plans, do a backflip into a Smokeycut, Spear, any good combo, and follow the combo up with a sweep to force the computer to do a backflip. Afterwards, use the Spear, any combo and a sweep. Repeat the Spear, combo, and sweep.

With Classic Smoke or Scorpion, the strategy is different. Try the flip-punch combo as mentioned in the first battle, which starts with a flip punch and any combo that starts with using high punch. Afterwards, follow it up with a sweep and the Spear to catch the opponent backflipping. After a successful Spear, do a good combo, sweep, and repeat.

Smoke and Sektor both possess the Teleport Uppercut, so flip at them so that they use it, and you can simply uppercut them, or use the aforementioned Smoke combo. If you're Kabal, however, you can use his Raging Flash followed by an uppercut, or jump punch and mid-air Gas Blast.

Again, Noob Saibot is your best choice! Bear in mind that Noob's Teleport Slam is completely useless against all bosses. Get Goro with the Disabler and your high-punch combo. You can follow this up with a high kick, but be careful because he'll recover quickly. Retreat after delivering the high kick, and set up the Disabler again.

Avoid Kintaro's Teleport Stomp at all costs! Being Scorpion or Classic Smoke is an advantage since you can counter his missed Teleport Stomp or his taunting with the Spear followed by a combo. Cyber Smoke also can be useful, but the best kombatant overall is Noob Saibot.

Noob Saibot can destroy Kintaro with a quickly-executed Disabler followed by his high-punch combo and an uppercut. You will have to move closer after the combo's uppercut to deliver another uppercut. If you repeat this while avoiding Kintaro's stomp, he will pose no match.

Avoid getting too close to Motaro, and never throw projectiles at him since they reflect at you except for the Spear. The best kombatant to use against him is Kabal, Scorpion, Classic Smoke, or Noob Saibot. Their high-punch combos stick to Motaro, and you won't come up short-handed and miss. All you have to do is begin with a flip punch and quickly execute any combo that begins with high punch.

A good way to start a high-punch combo with Scorpion or Classic Smoke is to utilize their Teleport Punch. Sometimes, you'll catch Motaro, and if he happens to block it, he'll throw a punch and miss thus leaving him open for a high-punch combo.

If you're Smoke, you can catch Kahn with the Smokeycut and another Smokeycut, Spear, and a combo of your choice. Take advantage of the double Smokeycut since Kahn is the only character you can use it on.

With Kabal, you can wait for Kahn's Upwards Shadow Charge, uppercut him, run at him, press Low Kick, Low Kick, High Punch, High Punch, Down + High Punch to send him airborne, do a jump punch with a mid-air Gas Blast, and do another Gas Blast when you land. Return to the crouching position and repeat. If you really want to be technical, you can do the Raging Flash before uppercutting Kahn and the rest of the combo after Kahn's Upwards Shadow Charge.

Using Noob, you can decimate Kahn with the Disabler. You can implement the same strategies, but keep in mind that the Teleport Slam is completely useless, and you only have time to execute one or two combos during the Disabler's effect. Congratulations! Shao Kahn is no more! 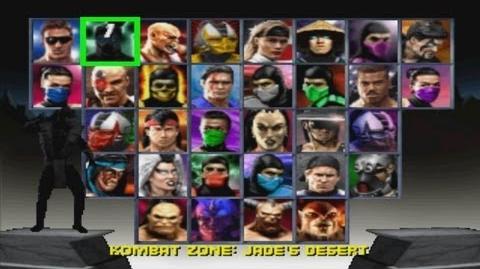 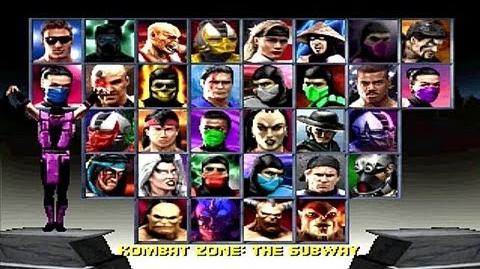 Mortal Kombat Trilogy - Playthrough 2 2 (PSX)
Add a photo to this gallery
Retrieved from "https://mortalkombat.fandom.com/wiki/Mortal_Kombat_Trilogy/Walkthrough?oldid=359003"
Community content is available under CC-BY-SA unless otherwise noted.