Mortal Kombat: Rebirth is a 2010 action and crime drama short-film that was directed by Kevin Tancharoen with fight choreography by Larnell Stovall. Based on the Mortal Kombat series of fighting games, the short-film "actually was made by the director to sell WB on his vision for a re-imagined MK film."[1]

The short-film features an alternate version of the Mortal Kombat universe. The characters of the game are portrayed with vastly different origins, founded in realism. There is no mention of Outworld or any other supernatural element, although the tournament itself is a main part of the storyline.

The film follows Captain Jackson Briggs while he informs an assassin named Hanzo Hasashi about the criminals Reptile and Baraka, the new Reptile being a man with harlequin type ichthyosis, and Baraka a failed surgeon who surgically attaches 2 10 inch blades to his arms, the latter of which has recently killed actor turned undercover officer Johnny Cage in a fight. Briggs believed they were both working for a man named Shang Tsung, and asks Hasashi to kill them in a mysterious tournament hosted by Tsung. Hasashi asks what will he be rewarded with for accomplish such tasks, and he is offered Sub-Zero, whom he thinks is dead. Sonya Blade then arrives with a folder and informs Hasashi that his enemy Sub-Zero is alive and the one he killed was his older brother. Since the real Sub-Zero will be at the tournament, Hasashi, now calling himself Scorpion, agrees to participate.

Initially appearing on YouTube, the video was received with confusion by websites such as IGN and 1UP.com, both of which were uncertain if the video was a viral marketing ploy to promote either a new film or a video game. Contradicting reports came from the actors involved, with White's representatives believing it was an advertisement for an upcoming Mortal Kombat game,[7] while Ryan admitted her appearance was as a favor to a friend and described the video as a pitch for a film.[8] Tancharoen made the movie for $7,500.[9]

Series creator Ed Boon himself has noted that the film was "awesome"[10] and had "no idea it was being made,"[11] though he did note that "probably crosses the line" as far as "re-imagining" goes.[12] He later stated that he thought it was "incredibly well done" and that it was "a legitimate alternate universe Mortal Kombat."[13]

On Jan. 14, 2011, it was announced that an official 9-episode web mini-series called Mortal Kombat: Legacy based on the short also directed by Tancharoen and Michael Jai White had been greenlit by Warner Bros. Shooting is scheduled to begin in Vancouver on February.[14][15] WB is allowing a 9 episode show based off the video. [16] 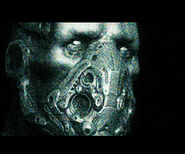 Baraka Vs. Johnny Cage
Add a photo to this gallery

Retrieved from "https://mortalkombat.fandom.com/wiki/Mortal_Kombat:_Rebirth?oldid=292313"
Community content is available under CC-BY-SA unless otherwise noted.