Mortal Kombat: Deception precedes Shaolin Monks (in release date only) and follows Deadly Alliance. Deception was released in two versions for the Playstation 2 and Xbox, a regular version, and a 'Kollector's Edition', which added a metal trading card and a bonus disc containing a history of Mortal Kombat, several video biographies of characters, and an 'arcade perfect' version of the original Mortal Kombat.

"It was not by chance that this struggle came to be. The blame falls squarely upon my shoulders for giving evil the chance it needed and therefore fulfilling an ancient prophecy. Raiden's Earthrealm champions had failed to stop the Deadly Alliance from fully resurrecting the mummified army of the Dragon King. In the end, only Raiden himself stood between Earthrealm and total destruction. Defying the Elder Gods' wishes, he alone challenged Quan Chi and Shang Tsung in Mortal Kombat, Earthrealm's last hope for freedom. Raiden fought well against the two sorcerers, and it seemed as though victory was at hand. But the combined might of Quan Chi and Shang Tsung proved to be overwhelming even for a Thunder God. Raiden, was defeated. The Deadly Alliance had won. Their victory was short-lived. As suspicion and lust for power overcame both Quan Chi and Shang Tsung, the former allies turned on each other. The Deadly Alliance was no more. Quan Chi defeated Shang Tsung and revelled in his conquest. But it is said that there is only one true ruler of Outworld. And that ruler had returned: Onaga, former emperor of Outworld, the Dragon King. The prophecy had been fulfilled. The Dragon King had indeed returned to Outworld to reclaim his army and impose his dominance. Death awaited all who stood in his way. And so it was that a new alliance formed out of desperation. Sworn enemies joined forces to kombat a greater threat. Raiden began to realize that even their combined might was not enough to defeat the Dragon King. There was only one chance left. Raiden’s sacrifice was in vain, for the blast had little effect on the Dragon King. Now Onaga has what he needs to shape the Realms as he sees fit. I was the fool who brought him this power. Only I can destroy this threat, born of deception."

(These are the words of Shujinko.)

In the final events of Mortal Kombat: Deadly Alliance, Raiden's Earthrealm warriors had failed to stop the Deadly Alliance. Kitana, Kung Lao, Jax, Sonya Blade and Johnny Cage were defeated during their battle against the Tarkatan warriors, Frost was consumed by her own freezing ability and put into the tombs of the Cryomancers, and Sub-Zero was trapped in Outworld, trying to find the portal back to Earthrealm. Ultimately, the Deadly Alliance itself (Shang Tsung and Quan Chi) had completed their plan. The Elder Gods had advised Raiden not to interfere, but he defied their wishes; alone he challenged the alliance of Shang Tsung and Quan Chi, in Mortal Kombat. He had the upper hand for most of the fight, besting Tsung and Quan Chi, until Tsung absorbed a soul from the Soulnado and knocked him down with a fireball. From there, Quan Chi and Tsung combined their powers to defeat Raiden, with Quan Chi levitating the helpless Thunder God and Tsung using a fireball to strike Raiden down.

With Raiden defeated, the Deadly Alliance turned on each other, with Tsung wanting Quan Chi's amulet. The Deadly Alliance was no more and Tsung found himself facing his one time partner Quan Chi. Despite Tsung's efforts, Quan Chi proved too much for him. When Quan Chi stood alone, a hulking form entered the tomb, and the mummies of the Dragon King's army turned to kneel. In disbelief, Quan Chi looked in shock and in great horror... Onaga, the Dragon King, had returned.

Quan Chi knew that the Dragon King had come to claim his amulet. Quan Chi used his powers against Onaga, but he could not stop him. Even with Tsung, and then Raiden, helping him, they could not stop Onaga. Raiden concentrated his godlike essence into a single blast, which destroyed the palace and everything within, but Onaga was unharmed, and possessed the amulet.

Onaga now seeks to use six artifacts called Kamidogu to fuse the realms into the One Being, resulting in the destruction of everything therein. Those fighters not killed in the battle against the Deadly Alliance (Li Mei, Scorpion, Sub-Zero, Kenshi and Bo' Rai Cho) must now stand against him and his supporters. These include the Tarkatan horde (led by Baraka) and their former allies, who were resurrected by Onaga and are under his control. Raiden became corrupted by his suicide by Onaga's magic and resurrected Liu Kang's body and sent it on a rampage. The spirit of Liu Kang joins Ermac to help him save his friends.

In the story explored in Konquest mode, a young man named Shujinko is deceived (hence the game's title) into spending his life collecting the Kamidogu for Onaga, who uses the guise of an emissary of the Elder Gods named Damashi. This is prior to Onaga's resurrection in the body of Reptile. Onaga only reveals his identity and intentions after Shujinko has gathered all the Kamidogu. Shujinko, led to believe he was working for the greater good, joins the others opposing Onaga.

Shao Kahn and Goro are playable characters in the GameCube and Play Station Portable versions, included to offset the lack of online play offered by the PS2 and Xbox versions. Both villains apparently survived the events of Mortal Kombat: Deadly Alliance; Shao Kahn by the use of a clone, and Goro was saved on the battlefield by Kahn after having been left for dead by his allies. Both characters follow the storyline of trying to return Shao Kahn to power.

Nearly every fighter in the entire series makes a cameo in Mortal Kombat: Deception.﻿

Bold indicates this arena must be unlocked.

Deception contained a RPG-style game named 'Konquest.' Konquest explored the history of Shujinko, starting prior to his training with Bo' Rai Cho and ending with the beginning of Deception. While mostly an adventure game, the combat elements all took place in the normal Deception fighting mode. Players seeking to unlock much of the bonus content in Deception were required to play through the Konquest mode, which critics regarded as a sub-par addition to the game.

Note: The story of this konquest mode takes place long before the first Mortal Kombat game.

Chess Kombat: A mode where you can use characters as chess pieces including Leader, Champion, Sorcerer, Shifter, and Grunt. When you try to steal a square from one of your enemies, you will fight that opponent for the square. You can fight at classic arenas such as Courtyard, The Pit, Dead Pool, Portal, and Living Forest.

Puzzle Kombat: A mode where you can play a game that is similar to tetris. To win, your opponent will have squares stacked up all the way to the top of the opponents' screen. When you get a colored dragon symbol, you will use it to land it on a same color the symbol is to give your opponent more squares.

The characters that are included in this mode are:

The arenas that are included in this mode are: 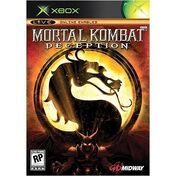 (Only referred to Kombat mode)

The Krypt has exactly 400 koffins to unlock. Like Deadly Alliance, players can unlock characters, arenas and other kontent. To look up the list of koffins, click on Mortal Kombat: Deception/Cheats.