Ed Boon
Monster is a minor character voiced by Ed Boon who appears in Mortal Kombat: Deception during the game's Konquest mode.

The protagonist Shujinko encounters him inside the Nexus, where Monster claims to be the true champion of the Elder Gods and challenges Shujinko to Mortal Kombat.[1] His name is only revealed through the character's health bar during the battle. Monster uses Scorpion's fighting styles and moves. After he is defeated, he is not seen again. When Shujinko questions Damashi shortly after regarding Monster, he claims that he doesn't know but he sensed great strength within the fighter.[2]

Monster was originally going to be an alternate costume for Scorpion. It was his rumored "knight" outfit. The developers felt that it didn't fit Scorpion, and that idea was scrapped.

There is little known about the background of this character. He claims to be the Champion of the Elder Gods, but it is unknown who declared him this and how he learned of the title. He could be the true Champion because Shujinko is not, and he seems to wear the armor later worn by Scorpion after becoming champion himself.

Monster is playable via an Action Replay code, which, if activated, will make him replace Scorpion. He can also be playable through a cheat with a PSP emulator for Mortal Kombat: Unchained. 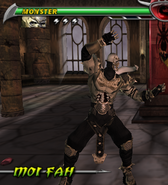 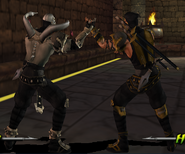 Monster compared to Scorpion (Back View). 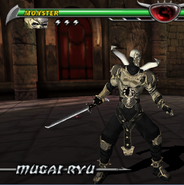