Monkey Fist (猴拳 Houquan) is a Chinese martial art which utilizes ape or monkey-like movements as part of its technique. One of the more difficult animal systems, the collection of weapons features the teaching of each weapon and when to use it, with this learning skill the student can use this for attack.

The monkey style can be traced back to the Han dynasty and is recorded in the Mi Hou Wu dance performed at the Emperor's court. There are actually a number of independently developed Chinese systems based on the monkey. Examples includes Xingzhemen (行者門) named after the protagonist Sun Wukong of the popular Ming dynasty novel Journey to the West, Nanhouquan (南猴拳) or Southern Monkey Fist originating from the Southern Shaolin Temple as well as the more well known Tai Sheng Pek Kwar Moon (大聖劈掛門) style of Hong Kong. The Houquan style from the Emei region, taught by the famous "Monkey King" Xiao Yingpeng and others, was also used as the basis for the modern wushu variant of monkey style (and monkey staff) that is often seen in demonstrations and competitions today. Each independent style has its own unique approach to the expression of how to incorporate a monkey's movements into fighting.

Monkey Fist may have contributed to other styles as well. For example, Wang Lang, the 17th century founder of Northern Praying Mantis Boxing (tanglangquan), was said to have borrowed the footwork of the Monkey style to complement the extremely fast handwork of Praying Mantis style

Monkey is used by Noob Saibot in Deception and Armageddon. 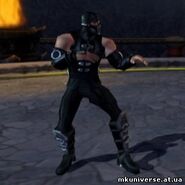 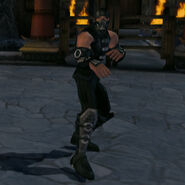 Noob's Monkey style
Add a photo to this gallery

Retrieved from "https://mortalkombat.fandom.com/wiki/Monkey?oldid=303086"
Community content is available under CC-BY-SA unless otherwise noted.