watch 03:19
Wiki Targeted (Games)
Do you like this video?
Play Sound

While appearing through the series, the Monk makes his playable debut in Mortal Kombat Mobile.

The Monk, or rather multiple Monks, is introduced in the series as a non-playable character seen in the background of the Shang Tsung's Courtyard arena in Mortal Kombat.

Monks are also members of the White Lotus Society, who serve Raiden and train at the Wu Shi Academy. Many also live at the Sky Temple along side Raiden and Fujin.

Many monks appear in Mortal Kombat 11, appearing in the Shaolin Trap Dungeon and on Shang Tsung's Island Ruins as zombified monks resurrected by a Revenant Jade. They later reappear in the final Chapter of the game's Story Mode during the raid on Kronika's Keep.

They also appear in the ending of Mortal Kombat 11: Aftermath during Liu Kang's ending, training in the Wu Shi Academy in Liu Kang's New Era.

The Shaolin Monks have the Wu Shi Academy and Shaolin Temple as their training grounds. They were attacked by Baraka and the Tarkata in MKII and a lot of them, were killed by Zombie Liu Kang, the enforcer of a corrupted Raiden in MKD.

They are a common enemy in Mortal Kombat Mythologies: Sub-Zero and use a variety of weapons.

The monks appear in two movies and one TV series first film, Conquest and Annihilation. They wear red.

The Shaolin monks on the balcony.

Both day and night versions of the Courtyard from Mortal Kombat (2011).

Kitana can't kill him, but was killed by Shao Kahn.

Liu Kang meets his grandfather in the first movie. 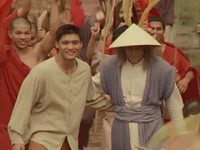 Kung Lao and Raiden behind the monks in Mortal Kombat: Conquest. 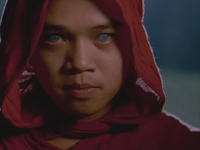 Evil Monk was possessed by Scorpion in Mortal Kombat: Conquest.

Wu Shi Academy Monk
Add a photo to this gallery
Retrieved from "https://mortalkombat.fandom.com/wiki/Monk?oldid=369949"
Community content is available under CC-BY-SA unless otherwise noted.