This is not the blood of a Chosen One. Your death has no worth.Mileena tasting Sonya Blade's blood, Mortal Kombat

Mileena is a character in the 2021 Mortal Kombat film. She is portrayed by Sisi Stringer.

Half-Tarkatan and half-Edenian, Mileena is said to be both vicious and unpredictable. Fiercely loyal to her creator, her teleportation skills and duel sai blades both aid her in her service to him. A clone of the princess Kitana, her only goal is to obliterate the champions of Earthrealm. She speaks with the voice of the legion, two distinct voices audible each time she speaks.

Mileena reports to Shang Tsung of Outworld, telling him that Sub-Zero managed to track down and kill one of Earthrealm's champions, Jax Briggs, but a second, Cole Young, escaped. He tells her to have their assassins double their efforts, but both remain unaware that Jax Briggs actually survived Sub-Zero's attack, albeit badly injured. He tells her that they're going to finish things and to send in the Reptilian, Syzoth. She does so, and it attacks Cole Young, Sonya Blade and Kano, but Kano manages to defeat it by ripping out its heart.

Later, Mileena is part of a group of Outworld warriors that attacks the champions of Earthrealm at Lord Raiden's temple after they are betrayed by Kano. She attacks Sonya Blade, but quickly realizes that Sonya does not have the blood of one of a Chosen One and declares her not worthy of her time. She leaves her wounded, and then Kano declares that "girls can be so mean," but that she's still good enough for him and attacks her, leaving her for dead under a pile of rubble. She is subsequently rescued by Jax Briggs when he unlocks his arcana.

Following this incident, Lord Raiden transports the champions to the void, a secret area where Shang Tsung and his forces cannot follow. There, Cole Young, who has finally unlocked his own arcana, declares that they must keep fighting. He devises a plan by which Raiden will transport them each one-by-one so that they can take the fight to Outworld's champions without them ganging up them. Sonya comments "Please tell me I get the bitch with the teeth," but Cole instructs her to instead take out Kano, as he knows that she's beaten him before and can do it again. He then declares that he personally will take Mileena.

After dispatching Kano, Sonya Blade gains his dragon mark and unlocks the power of her arcana. She returns to Cole, who is in a pitched fight with Mileena. Mileena is using her teleportation ability to try to gain the upper-hand against Cole, repeating appearing and disappearing faster than he can attack. "A little help?" he asks her and she uses her newfound power to fire a purple energy bolt at Mileena, blasting her through the chest and killing her.

Mileena's character has a silicone tongue, inspired by that of KISS rocker Gene Simmons. Prosthetics makeup supervisor Larry Van Duynhoven created a specially designed adhesion device to keep it in place. Regarding the character, actress Sisi Stringer stated that she knew fans wouldn't simply want her to be a killing machine, that she wants to live on by Shang Tsung's side[1] 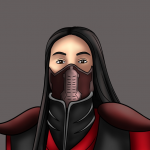