The Masked Guards make an appearance in the first Mortal Kombat movie as ninjas loyal to the sorcerer Shang Tsung, one of which is pitted against the Elder Sub-Zero by Tsung in a pre-tournament match and is killed in the process.

They also do battle with the three chosen heroes of Earthrealm by Raiden and the Shaolin Monks, Liu Kang, Johnny Cage and Sonya Blade after they are discovered spying on Tsung, Goro, and Kano, but are defeated. More arrived, but were backed off by Raiden (which Johnny gloats to the guards that they got lucky).

Both day and night versions of the Courtyard from Mortal Kombat (2011). 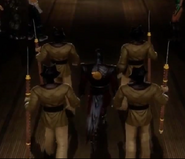 Four Masked Guards escort Ermac as he is introduced.

Dead Masked Guard in the Krypt

The Masked Guards in the Mortal Kombat comics.

Kung Lao having disguised himself as a masked guard.

Kung Lao shedding his disguise as he is about to fight Baraka.