The Map of Elements is an ancient map that revealed the location of the Temple of Elements. It made its debut and only appearance to date in Mortal Kombat Mythologies: Sub Zero.

The Map of Elements was originally created by a certain Shaolin monk when he first discovered the Great Temple deep within the Himalayan Mountains of Nepal and wrote down its location on the same scroll.

Now located inside a Shaolin temple, it was guarded by monks at all times. However, the elder Sub-Zero was able to infiltrate the temple and steal it. The map shows a way to a temple which itself including its construction, predates humanity's recorded history, and for many thousands of years, the Temple of Elements was built and has been hidden on Earth. The Map of Elements is the only evidence of its existence. 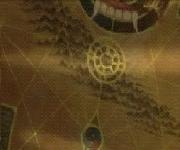 Intricate details on the Map of Elements also shows the Himalayan Mountains of Nepal in Earthrealm's continent of Asia.

Sub-Zero the Elder (Noob Saibot) returns to the Lin Kuei clan with the ancient Map of Elements.

Map of Elements in the Shaolin Temple