The Lungchuan Dao or Red Dragon Sword is a sword located in the Chamber of Artifacts arena in Mortal Kombat: Deception. The sword was housed inside a large gem-shaped object in the center of the arena, which players could smash in order to obtain the sword during kombat.

The blade is very similar in design to the Devastator. 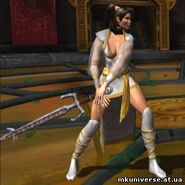 The emerald gemstone containing the sword behind Kira

Concept art of the sword 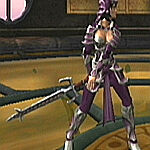 Li Mei wields the sword
Add a photo to this gallery
Retrieved from "https://mortalkombat.fandom.com/wiki/Lungchuan_Dao?oldid=350872"
Community content is available under CC-BY-SA unless otherwise noted.