Forest
The Living Forest is an arena located in Outworld. This forest has been haunted for centuries. The trees themselves are sentient, some with faces that groan and roar. Some of the trees are hungry, and unsuspecting travelers may find themselves ensnared in their treacherous branches, and become devoured. In turn, those consumed become part of the forest.

In Mortal Kombat II, Jade and Smoke can be seen lurking in the background, occasionally poking their heads from around the trees. A since-disproved rumor had the winning player performing a Stage Fatality where one of the trees would chew up the opponent (this concept was integrated into Shaolin Monks as a means to progress through the level). This version of the Living Forest reappears in Mortal Kombat Trilogy.

The arena's appearance in Mortal Kombat: Deception again remained largely unaltered, aside from being a square-shaped arena rather than a linear one.

In Mortal Kombat: Shaolin Monks, the Living Forest is both a Versus mode arena and a walkthrough area players can access through the single player/co-op modes. However, it looks significantly different than its MKII predecessor, sporting tombs and canopy walkways in the trees, and lit by many torches. It also features a variation of the sentient tree that is more humanoid and spindly in shape and tries to swat at and toss unwary individuals about. The original larger trees can be used as a death trap for players to throw enemies into where they devour anyone unlucky enough to fly into their mouths. Snakes also inhabit the murky waters of the area and they attack anyone who stumbles upon their territory.

The Living Forest returns once again in Mortal Kombat (2011), this time with corpses laying around and hanging in the trees, and the tree faces now have a more skull-esque shape. This new Living Forest is home to a new Stage Fatality where the opponent can be thrown into a tree's opened mouth. Soon afterward, the tree begins to feast on the kombatant's flesh, leaving only the legs behind.

In one of the MK comics, the forest is said to have once been a part of Edenia, where it was known as the Laughing Forest, as the trees were jolly and filled with mirth.

Concept Art in MKII (before)

Concept Art in MKII (after)

The Living Forest in MK4 and MK Gold. 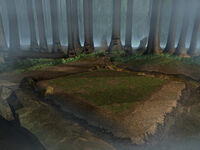 The Living Forest in MK: Deception and MK: Unchained.

The Living Forest in the Mortal Kombat comic books.

From the Living Forest into Reptile's Lair.

Classic Smoke hides behind a tree within the Living Forest in MK 2011.

The Living Forest as a Kombat Kard background in MKX.

Living Forest in MKX.
Add a photo to this gallery
﻿
Retrieved from "https://mortalkombat.fandom.com/wiki/Living_Forest?oldid=327798"
Community content is available under CC-BY-SA unless otherwise noted.