< Liu Kang
View source
watch 02:46
The Quarry - The Loop
Do you like this video?
Play Sound

Liu Kang is a character in the 2021 Mortal Kombat film. He is portrayed by Ludi Lin.

Part of Lord Raiden's team of champions, Liu Kang has dedicated his life to serving as a guide and counselor in Mortal Kombat for the forces of Earthrealm. A shaolin monk, he knows everything there is to know about the tournament and has unlocked his own arcana, able to manifest and manipulate fire. Pure of heart, even when Raiden himself has lost faith in Earthrealm's forces, he still believes. He earned his dragon marking and arcana by slaying another man with the marking, one who trafficked orphaned children.

Liu Kang intercepts Cole Young, Sonya Blade and Kano as they make their way to Lord Raiden's temple. Kano is immediately suspicious of him, pulling out his knife, but Kang simply blasts him with fire, telling him he is not his enemy. He introduces himself as from the Shaolin Order of Light and Sonya recognizes him as being one of Earthrealm's champions. Kano wonders if Kang's ability with fire means that he too will get superpowers, but Liu places his hand on his shoulder, telling him there's much to learn.

Liu Kang guides the group to Raiden's temple. He tells them that it is essential they begin training for the next tournament, but that they do not have much time. He explains that they are not many of the left and they must train harder and faster or else their opponents will ravage everything they hold dear. Inside the temple, he shows Sonya to a badly injured Jax Briggs, explaining that it is his charge to gather the champions, but it was too late for Jax. He assures her that they are doing everything they can to try to treat him.

He brings the champions before Lord Raiden, but the thunder god is not impressed with what he has to work with. Nevertheless, he agrees to begin training and repels Shang Tsung of Outworld's attempt to invade the temple. Liu Kang then introduces the warriors to his friend and partner Kung Lao, descendant of the grand champion of the Order of Light, and begins their training. However, when Sonya asks to stay for the training, he refuses, stating that a fighter without a dragon marking can never achieve their arcana and is therefore a liability. He and Lao then begin testing Cole and Kano, but it does not go well for either of them. Cole gets wounded in the fighting and, frustrated, asks Kang just how he's supposed to find his arcana. Kang tells him that it must come from within. Cole asks him just how he found his own arcana. He explains that he was just a stray, adopted and brought to the Wu Shi Academy after being found half-dead in the gutter. Upon graduation, he was given the name of a man who trafficked in orphans. He killed the man, took his marking, and so doing, unlocked his arcana.

Liu Kang and Kung Lao continue the training and although Kano manages to unlock his arcana through anger, Cole continues to struggle. Kang tells Cole that pain is the ultimate catalyst, but when the former MMA champion continues to fail, Raiden sends him back to his family. Shang Tsung's forces then attack the temple, the group betrayed by Kano. During the fight, Kang battles Kabal, who mocks him, asking him if he wants him to go slower. Afterwards, Cole is transported back by Raiden, having defeated Goro and unlocked his arcana. In retaliation, Shang Tsung sucks out Lao's soul. Kang can only watch in horror and is restrained by Cole before Raiden transports them and the other remaining warriors to the Void, a safe area that Shang cannot reach. There, Kang expresses his despair, saying that he and Kung were supposed to die together. He continues that without Lao, Earthrealm is lost, but Cole declares that it is not over and that they still have to fight. He devises a plan to have them each take one of the Outworld fighters individually before saving Sub-Zero for last by using Lord Raiden's power to transport people anywhere within Earthrealm.

Liu Kang is assigned to take out Kabal. This proves a fierce fight, with Kabal using his speed to try to gain the advantage and managing to wound Kang. Ultimately, however, the monk manages to gain the upper-hand, trapping Kabal in black quicksand. He then summons a dragon of fire, which consumes him, declaring "fatality, for Kung Lao." Following this, Cole gets transported away by Sub-Zero, thus negating the plan for everyone to fight him together. Kang is brought back along with the other champions after Cole is victorious. Cole introduces them to his wife and daughter as his friends and Kang uses his fire powers to warm them up, after having been trapped in ice by Sub-Zero. He then watches with the rest of the group as Lord Raiden expels Shang Tsung, then assigns Cole to begin searching for the next generation of champions.

Ludi Lin, the actor who portrays Liu Kang, played the Mortal Kombat series as a child and watched Robin Shou as Liu Kang in the original Mortal Kombat' film, who became one of his heroes. He skipped school to watch the film's sequel.[1] 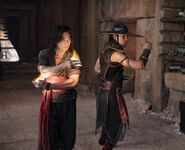