The Lin Kuei Palace, also known as the Lin Kuei Temple, is located in the icy region of Arctika in Earthrealm. The arena was first introduced in Mortal Kombat: Deadly Alliance, and has made recurring appearances in the franchise since.

Sub-Zero needed a remote base of operations for his newly reformed Lin Kuei clan. After a long search, he found this mysterious and ancient temple abandoned and frozen in the arctic wilderness and immediately claimed it as the new home of the Lin Kuei clan.

In Mortal Kombat: Armageddon, after Taven learned from a group of monks and their abbot that it was built to honor the "Lady of Flame," which is his mother Delia, he enters the long forgotten temple and fights various Lin Kuei warriors. After entering a room, he finds an ice coffin and accidentally breaks it, awakening Frost, who was sealed inside the coffin. Frost quickly attacks Taven, but is defeated and she leaves the chamber.

Taven continues, but is confronted by Sub-Zero. Before the outcome of the battle could be decided, Sub-Zero takes notice of the dragon tattoo he had on his face, commenting that it was similar to the one on the unopened vault door behind him. Taven, however, tries to open the door and succeeds. He acquires the armor his mother left for him. Sub-Zero comments that the second vault door had been opened long ago, before his new Lin Kuei had even arrived.

Before Taven could make sense of this revelation and what it meant for his brother Daegon, the Lin Kuei Palace was invaded and attacked once again, only this time by an army of demonic ninjas, led by Noob Saibot and Smoke. The two fighters eventually team up as Taven and Sub-Zero defeat Noob Saibot and Smoke. After Noob's defeat, Sub-Zero tells Taven that Noob Saibot is actually his older brother, who was corrupted in the Netherrealm after his death. Sub-Zero also informs Taven about a mysterious clan known as the Red Dragon, whose location is in Charred Mountain.

And the Lin Kuei Temple is one of the arenas in the racing minigame Motor Kombat, while the temple court and inner sanctums are arenas in Konquest mode.

The Lin Kuei Temple reappears in Mortal Kombat X as an arena and prominent location in the story mode.

In Chapter 1, Johnny Cage informs the new Special Forces team (consisting of Cassie Cage, Jacqui Briggs, Takeda Takahashi, and Kung Jin) their new orders. Because of the Outworld Civil War, Johnny wants to know if the Lin Kuei will assist Earthrealm if Mileena wins the civil war, however Sub-Zero has gone dark and the team need to investigate why, retrieving him by force if he refuses to comply.

In Chapter 3, the team arrives at the Lin Kuei Temple, Sub-Zero is informed the Special Forces team have arrived. He then orders them to be allowed in, the team confront Sub-Zero and thanks to Kung Jin's reckless behaviour, they fight with Sub-Zero and the Lin Kuei. One by one, he fights the team, asking Cassie what her mother would do if she was in the same situation, and asking Takeda why his skills didn't reveal Sub-Zero's presence. He talks with Jacqui about her father and their shared dark history, he also berates Kung Jin for mocking his comrades and not rallying them. After all four members are subdued, Sub-Zero explains the mission was a training exercise for the team. He informs the team that while they show promise, they need to work as a team and not individually.

In Chapter 9, Hanzo recalls a meeting with Sub-Zero at the Lin Kuei Temple, formalizing peace between the Shirai Ryu and the Lin Kuei. After Frost's attempt on his life, as well as a fight with Sub-Zero, Sub-Zero explains he did not invite Hanzo for treachery. Hanzo is informed by Sub-Zero after they enter the Temple that Sub-Zero had always assumed he unfairly blamed his clan for the death of the former's clan and family. Sub-Zero reveals the truth to Hanzo by using Sektor's preserved memories that Quan Chi was employed by the Lin Kuei to exterminate the Shirai Ryu and anyone affiliated with it. Realising the truth, Hanzo states that Quan Chi's debt will be paid and sets out for the sorcerer.

The Lin Kuei Temple makes a brief appearance in Chapter 10, after Shinnok corrupts the Jinsei, Sub-Zero runs out of the temple to witness Shinnok's corruption taking over Earthrealm.

In Mortal Kombat X, the Lin Kuei Temple features six arena interactions. From farthest left to right, they are:

Sub-Zero holding Frost's body in his arms while gazing ahead to the Lin Kuei Temple.

Taven in front of the Temple.

The Lin Kuei Palace in the background in MKU.

The Lin Kuei Palace as a stage in Motor Kombat.

Sub-Zero meditates outside the Temple in the Mortal Kombat X comic series.

Outside the Lin Kuei Palace in MKX. 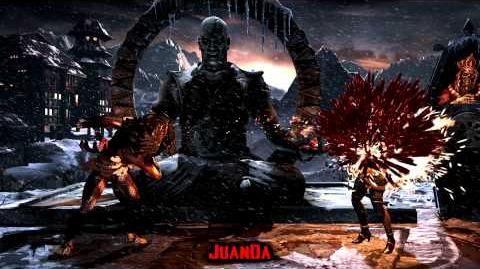 Retrieved from "https://mortalkombat.fandom.com/wiki/Lin_Kuei_Palace?oldid=314932"
Community content is available under CC-BY-SA unless otherwise noted.