The Kytinn are a sentient race of colonial, insect-like humanoids from the island realm of Arnyek, a realm that was conquered by Outworld under Shao Kahn's rule due to not having any defense against outsiders. Kytinn grow from the form of maggot-like larvae inside of victims' bodies, emerging with wings in a humanoid form from them as if they were a cocoon, at times within seconds of their implantation. The stronger the host of the Kytinn maggots, the stronger the resultant Kytinn will be, with, as an example, Kytinn emerging from one of the Elder Gods being nigh unstoppable.

Almost all information known on the Kytinn is from a single female specimen, making knowledge of a male version, if it exists, difficult to come by. Grown female Kytinn possess highly toxic blood and the ability to excrete very potent toxins from their bodies through their hands or mouths, to the point of allowing it to drip from their extremities without harming themselves. They can release bugs from their bodies to heal others by devouring bullets and sealing wounds, pick locks through a large amount of gnat-like creatures, heal from seemingly fatal injuries by application of bugs to wounds to regenerate, or release a swarm of bugs from their bodies through their torsos, which have a readily available slit at the abdomen level to remove Kytinn maggots on a whim. Female Kytinn also have four poisonous ovipositors that emerge from their backs, as well as the aforementioned wings, all of which can be used effectively in combat as well as to stand upon. Despite their hive-mind mentality, insightfulness and loyalty are known to be uncommon traits within their species. They are also said to be cannibalistic, with a strong taste for the flesh of their own kind.

Under the reigns of Mileena and subsequently Kotal Kahn in Outworld, D'Vorah, a member of this race was a leading force, at one point the First Minister of Kotal Kahn. Beforehand and even during these reigns, Kytinn were seen as disgusting, fearsome, and nasty creatures by many. 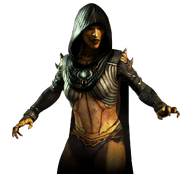 Concept of a Kytinn Male by artist Justin Murray.