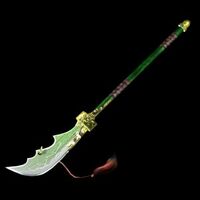 The Kwan Dao (關刀, Mandarin: Guan Dao, Cantonese: Kwan Dou) is a type of Chinese pole weapon. In Chinese it is properly called a Yanyue Dao (偃月刀 lit. "crescent moon blade"), the name under which it always appears in texts from the Song to Qing dynasties such as the Wujing Zongyao and Huangchao Liqi Tushi. It is comparable to a European fauchard or glaive and consists of a heavy blade with a spike at the back and sometimes also a notch at the spike's upper base that can catch an opponent's weapon. In addition there are often irregular serrations that lead the back edge of the blade to the spike. The blade is mounted atop a 1.5 m to 1.8 m (5-6 foot) long wooden or metal pole with a pointed metal counter weight used to balance the heavy blade and for striking on the opposite end. The blade is very deeply curved and therefore unlike most polearms, solely useful for sweeping cuts where it relies on range and power.

On modern versions, a red sash or tassel is attached at the joint of the pole and blade. Variations include having rings along the length of the straight back edge as found in the nine-ring guan dao, having the tip curl into a rounded spiral as in the elephant guan dao (literally Elephant Knife), or featuring a more ornate design as exemplified by the Chinese dragon/Dragon head guan dao. However, apart from the "Elephant knife" none of these variations seem to have historical ground.

According to legend, the guan dao was invented by the famous general Guan Yu during the early 3rd century AD, hence the name. Due to his large stature, he was able to wield such an imposing weapon and developed the guan dao into a versatile tool. Guan Yu's signature guan dao was called "Green Dragon Crescent Blade" (青龍偃月刀) which weighed 82 Chinese jin (estimated 18.263 kg. a Han Dynasty jin equals 222.72 grams in metric system)

However, historically speaking it is possible that Guan Yu would have used a dagger-axe (ji). While the famous novel Romance of the Three Kingdoms by Luo Guanzhong describes him as wielding the guan dao, this description might be an anachronistic one, as there is no illustration to show that it was ever used prior to the 7th century, (Tang dynasty or Song dynasty) when it was first illustrated in the military manual Wujing Zongyao. The guan dao, therefore, was possibly neither invented nor ever used by Guan Yu, meaning that it is somewhat of a pop culture-derived misnomer. Some historians believe that the guan dao was simply an uncommon, rare weapon prior to the Song dynasty and was thus not illustrated before then but without historical proof this will remain speculation.

While it could be used from horseback, the guan dao was primarily used by infantry as an anti-personnel and anti-cavalry weapon. The modern guan dao as adopted by martial artists today usually weighs between 2 kg and 10 kg (4.5 and 22 pounds), while it is said that Guan Yu's original guan dao weighed significantly more. During the Qing dynasty some extraordinarily heavy versions of guan dao were made for use in military examinations: a candidate had to be able to wield a weapon weighing 80, 100, or 120 jin (48, 60 or 72 kg, using the modern value for 1 jin = approximately .6 kg) in order to pass. The weight of Guan Yu's weapon was probably mis-estimated based on some of these examples.

Historical guan dao, for the most part, were largely used by Chinese infantry, in the Qing it was only used by the all Han Green Standard Army. Apart from that, the lack of standardization of the antique examples that survive to today seems to indicate that at least from the 19th century it was popular in the civilian martial arts realm as well.

The guan dao is used quite frequently in the part of contemporary Wushu derived from the Shaolin kung fu or Wudangquan form of martial arts in modern times. According to contemporary Wushu practice, its purpose is more to disarm an opponent and deflect his strikes rather than to attack. To that end, a large veil cloth is attached to the end to dissuade and confuse opponents. However, there is no evidence of this being an authentic aspect of the weapon's usage. Tassels and cloths are attached to numerous weapons such as jian, dao, meteor hammer, and guan dao used in Chinese opera, one of the sources of movements found in contemporary wushu. In actual combat a guan dao, or any other member of the family of long handled sabers, was used to hack and slice through an opponent. The considerable weight of the blade and the leverage of the handle would have allowed it to cut through most leather, chain, scale or light lamellar armor of medieval China. It was obviously an offensive and not a defensive weapon. Deflecting motions would be done with the back of the blade and rear of the handle, with direct blocks done more often with handle than blade to avoid chipping it.

Forms utilizing the weapon in nearly all traditional styles of Chinese martial arts, emphasize strong slashing movements and momentum to keep the heavy blade moving through a series of spinning cuts. The considerable weight of the weapon also makes guan dao forms good for training the overall conditioning of the body.

Retrieved from "https://mortalkombat.fandom.com/wiki/Kwan_Dao?oldid=349921"
Community content is available under CC-BY-SA unless otherwise noted.