The Kunai is a harpoon-like weapon used most notably by Scorpion from Mortal Kombat onwards. According to Mortal Kombat Legacy, Scorpion was a master of the kunai. There are two kinds of Kunai: Big Kunai and Short Kunai.

The ninja spectre Scorpion chose this particular blade as his own favorite weapon in both life and death, as he continued to use it in battle and even slaughtering his foes and anyone who dared to get in his way throughout the entire Mortal Kombat legacy, especially when he shouts his famous catchphrase "Get over here!" as he pierces his opponents with this attack.

The kunai itself has also appeared as another collectible Relic named "Scorpion's Spear" within the Konquest mode of Mortal Kombat: Armageddon. This was the most well-known title for the weapon until it was explicitly identified as a Kunai in Mortal Kombat: Deadly Alliance. In Mortal Kombat (2011), Skarlet has four short kunai on her right leg, which she can throw and attack her enemies with in kombat.

In Mortal Kombat X, Scorpion's apprentice, Takeda Takahashi, uses explosive kunai in battle. Along with this, Takeda uses serrated edge Whips with a kunai at their end to pull his opponents toward himself to inflict further damage, much like his master.

In Mortal Kombat 11, Sub-Zero has four big kunai on his left and right hips. 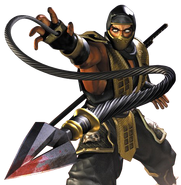 Scorpion with his trademark Kunai spear, and exclaiming his notorious catchphrases "Get over here!" or "Come here!".

Scorpion's Kunai in MK vs DCU.

Scorpion in kombat with his Kunai against Sub-Zero in MK 2011.

Scorpion as he fires the Kunai into Sub-Zero's chest. 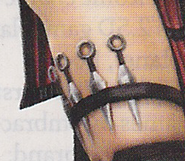 Scorpion sending out his Kunai while exclaiming the catchphrase "Get over here!" in the Mortal Kombat film.

Scorpion's Kunai in MK Legacy.
Add a photo to this gallery

Retrieved from "https://mortalkombat.fandom.com/wiki/Kunai?oldid=333858"
Community content is available under CC-BY-SA unless otherwise noted.