The Kreate-A-Fatality system is a finisher which debuted in Mortal Kombat: Armageddon. Also known as the custom-chain-Fatality system, it allows players to create their own Fatalities using a series of special moves and ending them in a brutal finishing move. It replaced the classic Fatality system, whereby a series of button presses would activate a pre-programmed animation sequence.

After defeating an opponent, the player has the option of starting the Kreate-A-Fatality system. A timer bar appears at the top of the screen and starts to empty. The player can then approach the opponent and enter a specific combo to begin the Fatality, using a violent move like hitting them, breaking a bone or tearing out an organ. After this, the timer resets and the player can input another combo, but the bar will decrease quicker each time a combo is added on. The player can perform up to ten combos before they can execute a final "Finisher" combo, which will outright kill the opponent (such as ripping their head off, or breaking their neck). The finisher combo can be executed at any time; it is possible to use one straight away to simply end the Fatality right away.

After a Fatality has been performed, it is given a ranking, depending on how many chains there were. The higher number of chains in the Fatality will give the player more kurrency to spend in the Krypt, or use to Kreate-A-Fighter.

However, if the timer runs out before a Finisher can be inputted, the Fatality will "fail" and no rank will be given, regardless of how many chains were inputted beforehand.

With the exception of Blaze, Goro, Kintaro, Moloch and Onaga, all of the characters share the same set of the Fatality moves. There are six different positions an opponent can be placed in (known as a transition), and during the chain (but only after performing the first Forward action, meaning they cannot start with a transition), the player can move the opponent around to any one position. With only one exception, Transitions do not count as a move.

This is the default position for the opponent. Here, the player can perform the following:

Knees (Down, Back, Square or Down, Forward, Circle.)

Here, the opponent is forced down onto his/her knees. From here, the player can do the following moves.

Behind (Down, Forward, Square.)

Here, the opponent is turned around. The player can perform these moves.

In this position, the opponent finds themselves lying face first on the ground, allowing the player to do the following:

The opponent is forced down on the ground, lying face up, exposing them to the following moves.

Whilst facing backwards, the opponent can be forced onto their knees, setting them up for the following:

In addition to the above moves, Dairou, Kenshi, Li Mei, Scorpion, Sub-Zero, Fujin, Sareena, Shang Tsung, Ashrah and Cyrax also have the ability to use their swords on opponents. Once their swords have been drawn, they gain new ways of increasing the chain or killing their opponent. However, they will be unable to put the sword away unless they otherwise impale it. Jarek also has the option of using his axe on an opponent. The different sword types tend to vary, with only some being able to do certain chains or finishers.

Kano, Kira, Mavado and Mileena also have the option of using shorter swords on their opponents, and their moveset tends to be slightly different.

Only Ashrah and Cyrax can perform moves in this position.

Blaze, Goro, Kintaro, Moloch and Onaga have a different moveset to the other characters in the game. They have fewer moves than the regular characters, but to compensate, each of their transitions counts as a chain. 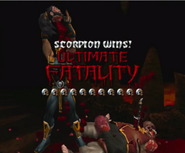 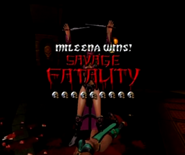 Moloch splits Kintaro in half with a punch.

Onaga kicks the head off of Smoke.

Scorpion decapitates his opponent with his weapon.

Fujin rips off his opponents arms, and uses as a weapon.
Add a photo to this gallery
Retrieved from "https://mortalkombat.fandom.com/wiki/Kreate-A-Fatality?oldid=265156"
Community content is available under CC-BY-SA unless otherwise noted.