The blade itself is made by Sub-Zero's freezing water vapor, manipulating it so that it forms the shape of the sword, hence its name; "Kori" derives from koori (氷), which is Japanese for "ice".

Oddly, In Deadly Alliance, Deception and Armageddon, despite the sword being made of ice, it doesn't shatter when used. This might possibly be due to the enhanced powers of Sub-Zero thanks to the Dragon Medallion, allowing him to keep his weapon from breaking or melting, while also making it just as strong and sharp as a real sword. However, in it's later appearances such as in MK (2011), the weapon shatters quite easily after use. This could just be a game mechanic or it could be that Sub-Zero's powers are not yet strong enough to maintain the blade this early in the timeline.

In his cybernetic form, Sub-Zero can create a larger version of the Kori Blade in the form of a large sword, though the shape differs from its form from the original timeline and the Kori Blade his human form uses.

In the original timeline, Sub-Zero's Kori Blade had a resemblance to a very large broadsword but starting from the new timeline in MK (2011), the Kori Blade was given a curved blade resembling a katana while also having an elaborate hilt. He would continue to use this form of he Kori Blade from MKX and onwards, although with differing appearances. 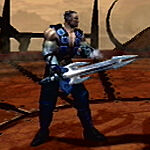 Sub-Zero with the Kori Blade in MK: Deadly Alliance. 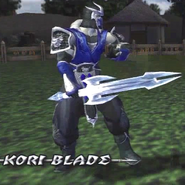 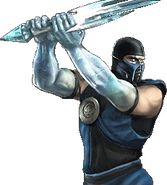 Sub Zero's Versus render in Armageddon, showing him holding the Kori Blade

The Kori Blade in MK vs. DCU.

Sub-Zero leaping at his opponent with Kori Blade in hand during his Icy Counter move.

Sub-Zero stabbing Scorpion with the Kori Blade in Kratos' trailer.

Cyber Sub-Zero's Kori Blade alongside his other weapons.

Sub-Zero, as a revenant, attacks Johnny Cage with the Kori Blade in MKX.

Sub-Zero forms a Kori Blade during his win pose in MKX.

Sub-Zero stabs the Kori Blade into the ground during his win pose.

Kuai Liang cutting off Sektor's arms with his Kori Blades 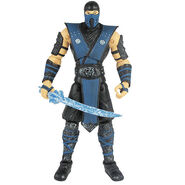 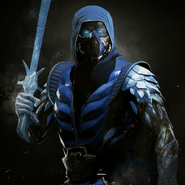 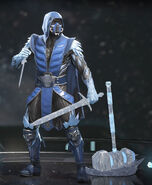