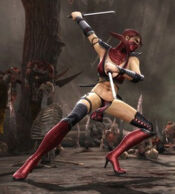 Kodachi Swords are Skarlet's main weapon in Mortal Kombat (2011). They are generally dual wielded, and are considered shorter versions of the Ninja Sword or Katana. (being quite similar to a Tanto.) They are meant to cut quick and powerfully, and be sheathed before anyone knows what hit them. The sheathes are put on Skarlet's lower back. 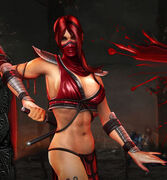 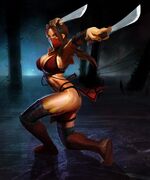 Skarlet after slaying Quan Chi in her MK 2011 ending

Add a photo to this gallery
Retrieved from "https://mortalkombat.fandom.com/wiki/Kodachi_Swords?oldid=354540"
Community content is available under CC-BY-SA unless otherwise noted.