The Kobu Jutsu (also known as Kobujutsu) are a pair of weapons used by the traitorous Edenian Tanya in Mortal Kombat: Deception and Mortal Kombat: Armageddon. These two weapons appear to be a pair of Tonfa-style blades with a secondary Kama-like blade. They are used as her weapon style in the two games with Deception having her use the Tonfas in her Torture Rack Fatality.

Tanya would still use Kobu Jutsu in the new timeline; she is seen using them during the Story Mode cutscenes of Mortal Kombat X. After returning and becoming a playable character through DLC, Kobu Jutsu would become one of her variations. With said variation giving her moves that have her using her Tonfas, she even uses them as a projectile in her Tonfa Toss move (which can be enhanced or become a Brutality) and she would also utilize them in her Bloody Boots Fatality. When not in use, they are secured on the side of her waist with the kama-like blades folded for safety. 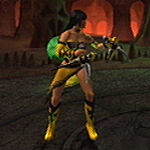 Tanya blocking with her Kobu Jutsu during gameplay in Armageddon.

Tanya unleashing her Kobu Jutsu in her Fatality.