watch 02:45
Wiki Targeted (Games)
Do you like this video?
Play Sound

Kick Axe is an axe-like weapon with medieval origins used by Jarek in Mortal Kombat: Armageddon. Replacing his Black Dragon Sword from his first appearance in MK4.

Jarek prefers weapons with medieval origins. The construction of this heavy axe is of wood, leather, bronze banding, and steel blade. 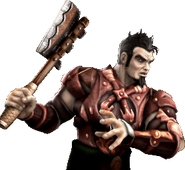 Jarek holding his Kick Axe in his Versus render.

Jarek prepares to finish off Meat with his Kick Axe.

Krypt Koncept art of the Kick Axe. With MK4 Jarek dual wielding two of them.

Jarek with a new Axe in the MKX comics.

Retrieved from "https://mortalkombat.fandom.com/wiki/Kick_Axe?oldid=351911"
Community content is available under CC-BY-SA unless otherwise noted.