In Mortal Kombat: Defenders of the Realm, his name was spelled Kiva.[1] Kiva acts as Nightwolf's spirit wolf, although he also doubles as a friendly and playful pet. While his loyalties are bound to Nightwolf, he keeps friendly company to any and all are left to guard the Cave alone while the rest of Earthrealm's defenders are out fighting.

A wolf is seen howling in Nightwolf's ending for Mortal Kombat 3 (and its subsequent ports), however it hasn't been confirmed to be Kiba.

A wolf appears in the second movie, Mortal Kombat: Annihilation, and though it is not confirmed to be Kiba, it seems to take inspiration from him.

Kiba's most prominent role is acting as Nightwolf's source of power, turning him into an avatar and giving him his powers and face marking. Kiba initially had an uneasy relationship with Stryker, but later became his friend.

A spiritual wolf appears in Nightwolf's MK 2011 ending, and although it is not confirmed to be Kiba, it seems to take inspiration from him.

In Mortal Kombat 11, Kiba appears as a spirit animal aiding Nightwolf. Summoning him will increase Nightwolf's strength, and also provide armor if amplified. 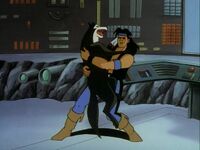 Nightwolf along with the spirit of Kiba and Komo.
Add a photo to this gallery

Retrieved from "https://mortalkombat.fandom.com/wiki/Kiba?oldid=353655"
Community content is available under CC-BY-SA unless otherwise noted.