Kia is one of the sub-bosses in the Pyramid of Shinnok in the game Mortal Kombat Mythologies: Sub-Zero and also a member of the Brotherhood of Shadows. She is one of three assassins serving under Quan Chi and Shinnok, along with Sareena and Jataaka. They each protected a crystal which, when combined together, allowed access to a teleportation device that sent the elder Sub-Zero to Quan Chi's throne room. Judging from Sareena's story, she also may be a demon from the Netherrealm using Quan Chi's magic to sustain her attractive human form.[1] Kia fights using razor-sharp boomerang blades. She was defeated by the elder Sub-Zero.

Kia was portrayed in MKM:SZ by Kerri Hoskins, who also played Sonya Blade in Mortal Kombat 3.

Along with Sareena and Jataaka, she makes a reappearance in Mortal Kombat: Armageddon's Konquest mode, still serving Quan Chi. Together, they battle Taven in the Red Dragon's lair, but are defeated. 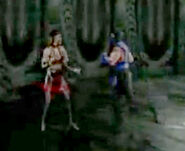 Quan Chi along with Jataaka, Sareena and Kia in the Konquest mode of Mortal Kombat: Armageddon 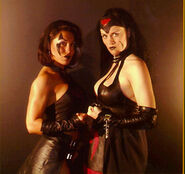