Hoskins is best known for portraying Sonya Blade and Kia in several incarnations of Mortal Kombat beginning with Mortal Kombat 3, she toured the United States and Europe portraying Sonya Blade in the Mortal Kombat: Live Tour, appearing at venues like Radio City Music Hall. [1] Hoskins also appeared in a number of other games produced by Midway Games including Revolution X (where she played the main villain, Mistress Helga), NBA Jam and War Gods (in which she lent her likeness to Vallah). She appeared as a secret character in NBA Showtime: NBA on NBC. Her character played suffocating defense who blocked every shot.

She trained for two years in Tang Soo Do, a Korean martial art.[2] 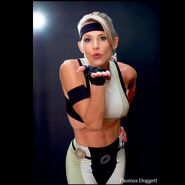 Kerri post an Instagram photo of her as Sonya Blade at 50.
Add a photo to this gallery

Retrieved from "https://mortalkombat.fandom.com/wiki/Kerri_Hoskins_Branson?oldid=360106"
Community content is available under CC-BY-SA unless otherwise noted.