Kenpō is the name of several martial arts. The word kenpō is a Japanese translation of the Chinese word "quánfǎ". This term is often informally transliterated as "kempo", as a result of applying Traditional Hepburn romanization, but failing to use a macron to indicate the long vowel. The generic nature of the term combined with its widespread, cross-cultural adoption in the martial arts community has led to many divergent definitions. The word Kenpō translates thus: "Ken" meaning "Fist" and "Po" meaning "Method" or "Law" as in "Law of gravity", a correct interpretation of the word Kenpō would be "Fist Method", which has the same meaning as "Quanfa". However, it is often misinterpreted as "the Law Of The Fist" , which appeals to those looking for a more "imposing" or aggressive sounding name. 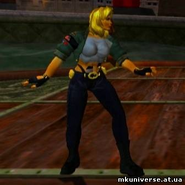 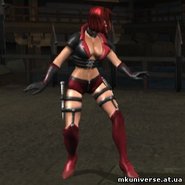 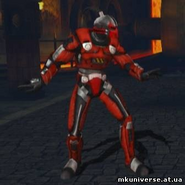 Sektor's Kenpo fighting stance
Add a photo to this gallery

Retrieved from "https://mortalkombat.fandom.com/wiki/Kenpo?oldid=329812"
Community content is available under CC-BY-SA unless otherwise noted.