Karate is an Okinawan fighting style used by Liu Kang in Mortal Kombat II, Johnny Cage in Mortal Kombat: Deadly Alliance, and is also used by Mokap in Deadly Alliance. In Mortal Kombat: Deception, karate as a catch-all of the style was expanded to the Okinawan Shorin Ryu used by Kobra, and as the erroneously named Shinto Ryu (A typographical error meant to either be Shindo or Shito Ryu, both styles founded on the Japanese mainland) used by Darrius. In Mortal Kombat: Armageddon this style was returned to Johnny Cage but named as Shorin-Ryu. The fighting stance, commonly held by the "aggressor" in one-step sparring (Ippon Kumite) technique practice, is also similar to Sub-Zero's Shotokan, which is the most commonly practiced style of karate in the world, founded by Gichin Funakoshi.

One of Liu Kang's early fighting styles was Karate in Mortal Kombat II. 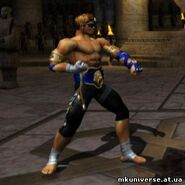 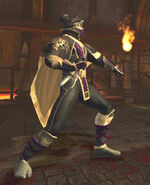 Rain's early fighting style in Armageddon was Karate, before it was changed into Zi Ran Men.