This Cybernetic Eye Implant gives the Black Dragon mercenary leader Kano the ability to have several vision modes such as infrared vision, x-ray and is capable of firing a deadly laser. It is the result of facial damage which Kano had sustained at the hands of Jax prior to the events of the Mortal Kombat series. It first appeared along with him in the first Mortal Kombat game and has been shown throughout the entire series. It later reappeared as another collectible Relic renamed Kano's Mask within Mortal Kombat: Armageddon´s Konquest mode. It is located out the front of the Lin Kuei Temple.

This steel plate, which was surgically grafted on his face by an unnamed doctor, allows Kano to focus great amounts of energy into his right eye. He can fire the laser at various levels, which can be low enough to just knock his opponent down, or at a higher level, which is enough to burn through an opponents body. Kano's Bionic Eye, added to his already lethal arsenal, makes him a seriously dangerous man.

It was revealed in the Mortal Kombat (Comic Series) that Kano had replaced his old implant with a new one after his previous encounter with Sub-Zero, who had damaged it. His new implant is much larger as it now covers his right ear. It also changes its color glow depending on which variation Kano uses: red for Cybernetic, yellow for Commando, blue for Cutthroat, and green for no variation.

In Mortal Kombat 11, his Cybernetic Eye is referred to as an Eye Shield and is a customized Gear item which he has a wide variety to choose from. Ranging from Klassic ones to the one Kano had back in MKX. Kano's Eye Shield also displays other features that has not been displayed previously, such as Scanning, Analyzing and an X-Ray Vision Mode which makes the "Eye" turn blue when in use. 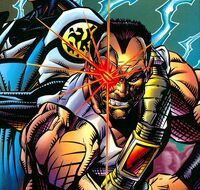 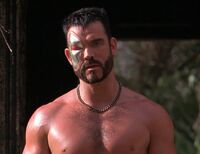 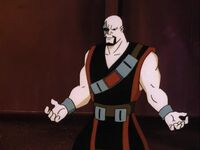 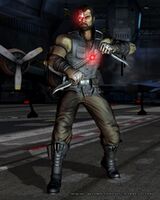 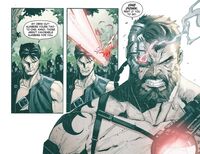 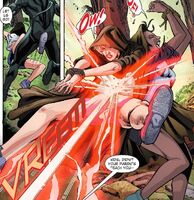 Kano ambushing Sub-Zero in the Red Dragon Temple, knock off his mask with his Laser. 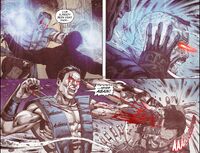 Devil in my Eye

Hate is all I Feel

If Eye was a Gun 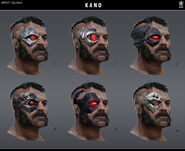 Retrieved from "https://mortalkombat.fandom.com/wiki/Kano%27s_Bionic_Eye?oldid=359832"
Community content is available under CC-BY-SA unless otherwise noted.