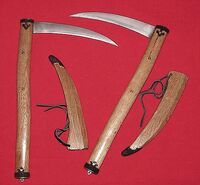 The Kama (かま) is a traditional Okinawan and Japanese farming implement, similar to a sickle, used for reaping crops but also employed as a weapon. The kama is often included in weapon training segments of Karate, Silat and more obscurely in some Chinese martial arts.

The kama can be used by itself or in pairs. Both the point and sharpened edge of the metal blade are called in to use. Okinawan kata suggest that it could also be used to block, trap and disarm an opponent's weapon. The point at which the blade and handle join in the "weapon" model normally has a nook with which a staff can be trapped. The edge of a traditional rice sickle, such as one would purchase from a Japanese hardware store, continues to the handle without a notch, as this is unneeded for its intended use. The hard edge of the blade would be kept razor-sharp to enable efficient cutting of crops, though this is sometimes a cause of training accidents by unskilled wielders, for whom blunt training versions of the weapon are created.