Coliseum
Kahn's Arena, also known as Shao Kahn's Arena, Kahn's Koliseum and Kotal's Koliseum, is located in Outworld outside Shao Kahn's palace fortress where he will watch battles and sometimes participate. There are countless spectators in the coliseum that come to observe the many battles that take place. Their emperor, Shao Kahn, observes the fights from his throne and enjoys the ensuing battles.

In Mortal Kombat II, Sonya Blade and Kano were held in Kahn's Arena as prisoners forced to observe the vicious battles that took place. Kahn's Arena also reappeared in Mortal Kombat Trilogy; however, Sonya and Kano were removed from the background as both characters were playable. The crowd will cheer whenever Kintaro or Shao Kahn hits the player character with a powerful attack.

In Mortal Kombat: Shaolin Monks, Kahn's Arena returns and serves as the stage for the final battles of the game against Shang Tsung, Kintaro, and Shao Kahn. The arena is depicted slightly different; the arena is no longer a walkway, but an elevated circular platform. Kano and Sonya still appeared chained up in the background; however, if the player engages in a secret boss battle with Kano, neither can be seen in the final fights (with Sonya being freed and Kano being dismembered).

Kahn's Arena, parsed in full as Shao Kahn's Arena, also appears as a stage in Mortal Kombat: Armageddon, this time as an octogonal arena at the center of which is a wooden platform, where the fighters start, that is raised to the middle of the coliseum at the beginning of a fight. As in previous versions, Kahn watches the fights personally, sitting at his throne atop a staircase leading to the outer area of the arena (he is still seen sitting regardless of whether both or either player has chosen Shao Kahn). The arena contains four death traps, one located in each diagonal corner: a giant meat grinder northwest, an acid pool northeast, a lava pool southwest, and a pit filled with long spikes southeast. At the outer part of the fighting area are two breakable wooden pillars east and west, and Shao Kahn's Wrath Hammer appears as a stage weapon, at the northern part of the arena. The arena also has four prisoners in chains, posted on a platform above each one of the death traps. All of them appear to be Shao Kahn's slaves, and none of them is animated.

In Mortal Kombat (2011), Kahn's Arena was renamed to "Kahn's Koliseum". Five characters can be randomly shown to be chained in the background - Kira, Li Mei, Tanya, Kitana and Skarlet. The emperor is now fully animated, mocking the fighters during the fight. In addition, this version is shown to have a dirt floor instead of a concrete linear pathway used for fighting, a much larger viewing audience for the width of the arena's spectacular and violent battles with a Tormentor fending off tamers in the background. This stage serves as the last arena in the "Mortal Kombat II" retelling and the final stage in the arcade ladder with the battle with Shao Kahn.

In Mortal Kombat 11 Kahn's Arena, now Kotal's Koliseum, was changed drastically when Kotal Kahn became the emperor. The background arena now includes various Mayan motifs, a pit which leads to a beast pen was added, weapons and shields were placed and gladiators riding in chariots are present. During the time anomaly, fragments of the former coliseum are present.

Shao Kahn on his throne in MKII

Shao Kahn's Battle Arena is located outside the Foundry in Outworld. 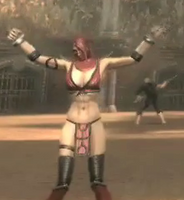 Kira's cameo in the PS Vita version, in place of Skarlet.

The stage's cameo appearance in Injustice: Gods Among Us. 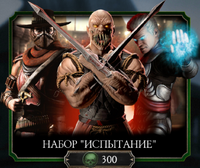 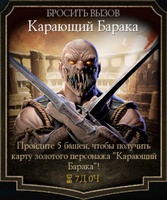 Add a photo to this gallery
Retrieved from "https://mortalkombat.fandom.com/wiki/Kahn%27s_Arena?oldid=335864"
Community content is available under CC-BY-SA unless otherwise noted.