This cybernetic, helmet-looking breathing respirator belonged to Kabal, member of the crime syndicate known as the Black Dragon clan. Kabal's Helmet first appeared along with him in Mortal Kombat 3, and has been shown throughout the Mortal Kombat series. It later reappeared as another collectible Relic called Kabal's Mask within the Konquest mode of Mortal Kombat: Armageddon.

This respirator helps Kabal breathe due to injuries sustained by Shao Kahn's Extermination Squads years ago when the Konqueror's invasion of Earthrealm began.

Kabal's trademark helmet has taken a whole new look in Mortal Kombat (2011), as Kabal was forced to still wear this life support system for the rest of his life after the injuries sustained by Kintaro burning Kabal alive.

In Mortal Kombat 11, his mask is redesigned from his previous mask seen in Mortal Kombat (2011) and Mortal Kombat X. His past version does not wear a mask, due to this version not being burnt and wounded by Kintaro yet in the altered timeline. The mask/helmet is referred to in-game as Face Shields. With the Gear Kustomization in the game, Kabal can wear different versions of the Face Shields, ranging from the current design, the previous designs seen in MK 2011 and MKX respectively, his klassic mask from Mortal Kombat 3, to new variants for the game.

Kabal along with his helmet, made an appearance in the animated cartoon series Mortal Kombat: Defenders of the Realm, in which he betrayed Kano and the Black Dragon clan and befriended Sonya Blade, after she expressed disgust over the prejudice he faced throughout his days due to his disfigurement.

In a flashback from his previous life, Kabal was originally a Black Dragon member before his horrible and unjust disfigurement. 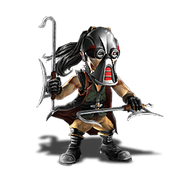 Kabal as a Revenant in MKX, wearing his mask from the MK 2011. 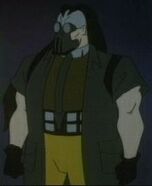 Kabal with his trademark mask in Mortal Kombat: Defenders of the Realm.

Kabal removed his mask and reveals his scarred face in Mortal Kombat: Defenders of the Realm.

Kabal teams up with Sonya Blade. 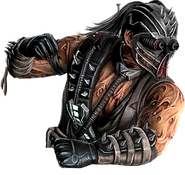 Kabal with his reshaped mask in Mortal Kombat (2011).

Pieces of what would become Kabal's life support system and mask.

Kabal in the surgery table after the mask and the life support system has been installed.

An upgraded Kabal in his ending with a new mask. 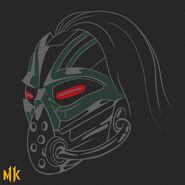 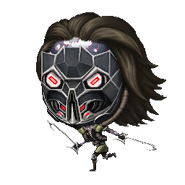 One of the mask's resembling the Klassic MK3 mask.

Koncept art of some of Kabal's Masks