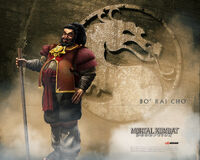 Jōdō or jōjutsu, meaning "the way of the short staff", is a Japanese martial art focused around using short staffs called jō. The art is similar to Bojutsu, and is also strongly focused upon defense against the Japanese sword.

Bo' Rai Cho uses Jojutsu as his weapon fighting style in all of his appearances throughout the series, in Mortal Kombat: Deadly Alliance, Deception, Unchained and Armageddon. He also uses the style again in his Bartitsu Variation in Mortal Kombat X, although replacing his Jo Staff with a collapsible cane.

"Jojutsu is the Japanese art of the short staff. It was first used by Muso Gonnosuke in the early 1600's after his loss to the swordsman, Miyamoto Musashi, while using a long staff of 6 feet. With assistance from Master Bo' Rai Cho, he subsequently developed a style with a shorter staff of 4 feet. Although he beat Musashi in a second duel, he was later defeated in his first Mortal Kombat tournament. Gonnosuke's soul was consumed by the sorcerer Shang Tsung."

Retrieved from "https://mortalkombat.fandom.com/wiki/Jojutsu?oldid=356063"
Community content is available under CC-BY-SA unless otherwise noted.